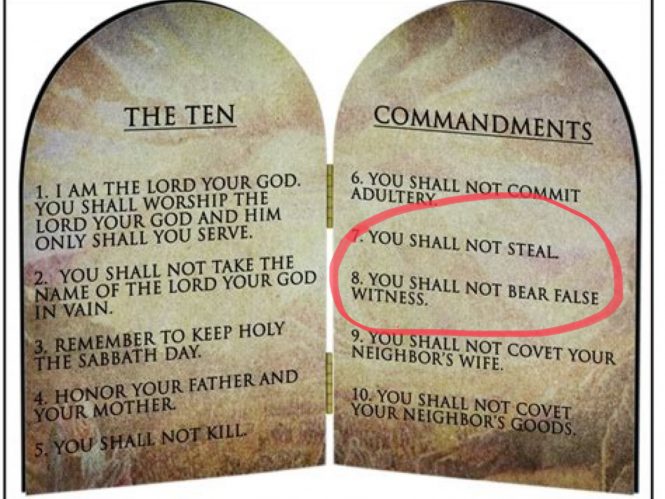 This week, we see more dishonesty coming from Steven Hopper and the other dissidents with ties to St. Paul’s, Montvale NJ.

Over the past week, Anglican Watch has continued our investigation of this situation, which involves protesters outside St. Paul’s, ad hominem attacks on Pastor Jill and the parish, myriad fabrications by the protestors, and homophobic hatred from the dissidents.

As part of our ongoing investigation, we obtained copies of multiple pieces of correspondence, several of which came to us from clergy outside the diocese. We also spoke with multiple individuals, interviewed various officials connected to the case, and spoke with the auditor now reviewing church financial records. Here’s what we learned:

Several weeks ago, the dissidents sent an email to clergy within the diocese of Newark about the conflict. This email, as is often the case with the dissidents, contained multiple inaccuracies, distortions, and fabrications.

In response, the bishop sent out the following email to diocesan clergy:

For the record, Bishop Hughes’ comments are accurate.

Sadly, a member of the Newark Episcopal clergy has some integrity issues, for the bishop’s email soon landed in the hands of the dissidents. This is unconscionable and unhelpful, and whoever the clergy person or church staff member is who provided the bishop’s correspondence to the dissidents should face discipline.

In response, dissident John Looes sent the email below. While we are not going to publish all the attachments, his comments are dishonest and yet another example of gaslighting. Specifically:

Anglican Watch finds Looes’ misrepresentations to be particularly ugly in light of his involvement, and that of his wife, in Hillsdale Borough politics.

Then on 5/18, Newark bishop Carlyle Hughes sent a letter to the parties, asking for a two-week cool-down period at the parish. The letter also provided dates for further upcoming Lombard Mennonite Peace Center (LMPC) trainings.

This letter is important for several reasons:

In response, Steven Hopper sent an email to the diocese, which emphasizes the fact that neither he, nor the other dissidents, are interested in reconciliation. Instead, their focus is on winning others to their point of view, to their own detriment, as well the interests of the parish, its vestry, and Pastor Jill. Here’s the email:

For the record, no one cares when Hopper’s family arrived here. Nor does anyone care about the protesters’ determination. Indeed, these comments are a manipulative effort to sidestep the real issues by resorting to intimidation.

Moreover, Anglican Watch’s investigation reveals that Hopper grossly misrepresents Pastor Jill’s meeting with the mayor, and his depiction of this event reflects a lack of understanding of Pastor Jill’s worldview and personality. Indeed, one need spend only a few minutes with Jill to realize how laughably dishonest Hopper’s comments are. And Hopper’s lies are a foolish strategy — lies are almost never a successful strategy for resolving conflict or getting what one wants.

In this case, these lies simply discredit the dissidents and make it that much harder to find common ground.

Anglican Watch continues to hope that all involved will engage in, and benefit from, the LMPC initiative. Indeed, we wish our own dioceses had the integrity to pursue this option, versus ignoring conflict and hoping it goes away. One of the great truths of human nature is that conflict ignored is conflict multiplied, and many dioceses have been brushing off conflict for so long as to have essentially imploded from their own rot. Simply put, large swaths of the church have reached the point that they are simply no longer viable as organizations.

That said, we are increasingly concerned about one aspect of the conflict, and that is understanding by the bishop and diocese of the underlying dynamics of conflict. Specifically, it is axiomatic that resolution of conflict requires good faith on all sides. When, as here, there is evidence of illegal conduct by former parishioners, we move past reconciliation and into another space.

To be clear, it always is best to assume good intent and positive outcomes.

At the same time, one is reminded of the words of Maya Angelou:

When someone shows you who they are, believe them the first time. People know themselves much better than you do. That’s why it’s important to stop expecting them to be something other than who they are.

Or, as a long-ago mentor of Anglican Watch editor Eric Bonetti used to put it:

It’s important to understand what your enemy wants. If someone shows up with a gun and demands your wallet, and that’s all they want, by all means give them your wallet and save your life.

But if someone shows up with a gun and demands your wallet, but it is clear they really want to kill you, don’t cooperate. Your only hope of survival is to fight back as hard as you can.

In the case of the Montvale protestors, Bishop Hughes may soon find that she has no choice but to say, “You are always welcome, but not if your goal is simply to savage the church.”

In other words, central to the Christian faith is the notion of boundaries. This includes prohibiting abuse of any sort, insisting on ethical conduct, prohibiting illegal conduct, and resisting injustice and oppressions. Inclusion is not the same as “anything goes.”

A similar situation pertained here in DioVA with the ACNA dissidents. For years, Bishop Lee and others sought in vain to live alongside the dissidents. But this was time and money wasted, for the dissidents would brook no compromise, but instead worked for the destruction of the Episcopal Church as we know it.

Even worse, by the time DioVA finally got up the nerve to say, “No mas,” it had lost sight of the notion of Christian conflict resolution. Now the modus operandi in DioVA far too often is, “Don’t get too involved. The diocese is a take-it-or-leave-it proposition, and if you don’t like it, you are welcome to leave it.” This approach leads to organizational schizophrenia, where leaders talk about building beloved community and healing across differences, even though they will fight tooth and nail to avoid doing just that. And alarmingly, people in the diocese often can’t see this profound dysfunction. Nor do they see how laughable it is when the diocese says it wants to heal structural racism, but it can’t even address its own internal conflicts. Physician, heal thyself.

Thus, we advise the bishop and the diocese to make every effort to strive for justice and peace. At the same time, they need to be alert to the possibility that the dissidents are not interested in these outcomes, and that the real root cause of the conflict may prove to be illegal conduct by several of the dissidents. This includes possible tax avoidance and money laundering through the church prior to Pastor Jill’s arrival.

Bottom line, there are often times when it is neither good, nor desirable, to seek peace. Similarly, there are not two sides to every story.

There are no good racists. There are no good homophobes. And there may not be good persons on both sides of this conflict.  The diocese needs to be alert to the possibility that this is the case and plan accordingly. And if criminal conduct has occurred, the diocese will need to make it clear that it is squarely on the side of the vestry, Pastor Jill, and all who are trying to do what’s right.