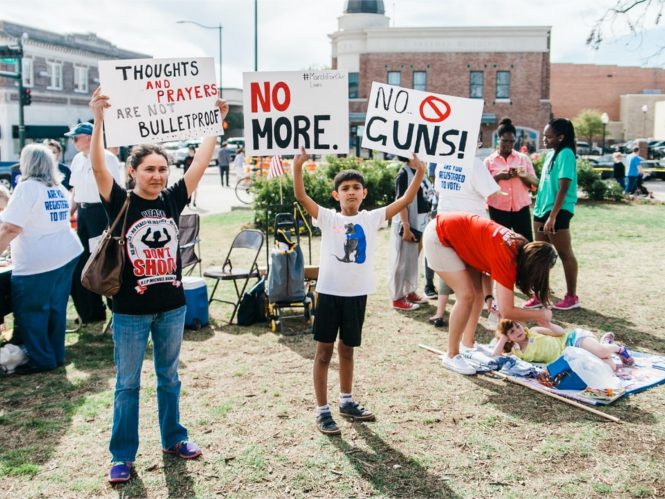 There’s a common saying in law enforcement, which is that sometimes, someone has to do something. What gets done may not be ideal. It may not comport with training. It may even be outside your department’s policy. But there are situations — like yesterday’s school shooting — where someone just needs to do something. To get it in gear and to try their best, here and now.

Today, as the nation mourns, we see the usual responses. People of every ilk mourn those we have lost. Members of Congress call for action. And the episcopacy sends out the usual Jesus-babble about justice, gun control, and mourning.

But to the Episcopal bishops, we’re say this:

We’re tired of your empty talk. We don’t want your prayers or cheap grace. We don’t want to hear how sorry you are about another mass murder. Your Jesus-babble and empty recitations of the baptismal covenant appall us. We are sick and tired of you preaching about love and not living it.

We want you to do something. We want it to be meaningful. And we want it now.

But what should bishops do?

The answer is not as hard as the church or its bishops make it out to be.

What’s to stop bishops from forming small groups, going door-to-door through the Senate office buildings, asking for meetings, and leaving handouts when then can’t get in?

Or ask if Senators will commit in writing to gun control legislation. If they brush you off, say so. Publicly. For once, don’t be afraid of your own shadow.

Of course, many bishops will say, “But I am already so busy.” That may be true, but much of it is the endless paper pushing, meetings, navel gazing and “self-care” for which TEC is famous.

And for the record, none of these things are more important that the lives of innocent children, lost in a senseless act of violence.

Moreover, that’s why bishops get paid big money. Indeed, the average is $118,679 for males and $104,938 for females. And some dioceses, like Virginia, historically have paid a lot more, with Bishop Lee having been paid a total annual package of $260,000. So, given how hard many in the church work for far less, there simply is no reason that the Episcopacy isn’t taking meaningful action.

That’s also one of the primary reasons to have a bishop—so that there is someone who can represent the diocese and its people. In that regard, many bishops are abject failures, or actually damage the reputation of the church.

Of course, some will argue that this is too close to politics to be comfortable. But I have news for folks — the messaging about gun control has already run off those who are offended by it. So it’s time to quit wringing hands and actually do something. Yet again, there is nothing more important, and nothing more worthy of our attention, than addressing the ongoing gun violence in America.

Nor is gun control an issue of the left or the right. Safety is common sense and it is something every child deserves. And public safety always comes first when it comes to constitutional scrutiny. Just as one’s First Amendment rights don’t extend to shouting fire in a crowded theater, neither do one’s Second Amendment rights provide for unfettered access to guns.

As to those who argue that more guns are the solution, I have news for them: The last thing any police officer wants is more guns on the scene in a situation like this. It’s already hard enough in the confusion to figure out who the bad guy is. Law enforcement doesn’t need every teacher and sixth grader on scene waving weapons on top of things.

The time to act is now. Episcopal bishops, stop with the cheap grace and the empty talk. Step up to the plate and act like adults. We are tired of sending money to our dioceses so people can spend their days in meetings and empty busy work. We’d rather see you try and fail than do nothing at all. And so far you have done nothing.

Or as one protestor, picture above, puts it, “Thoughts and prayers are not bulletproof.”