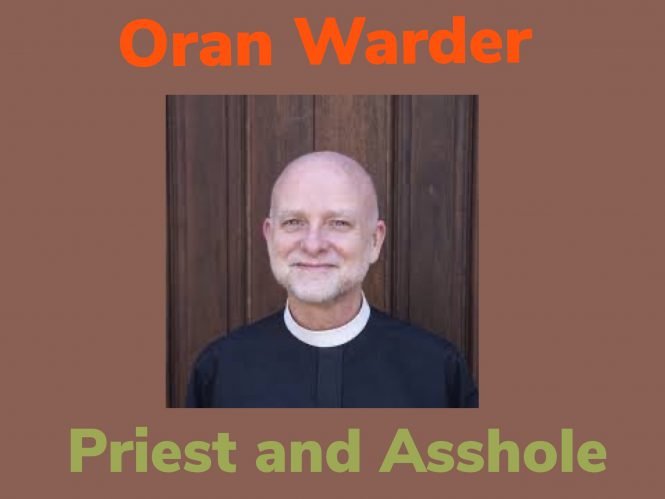 Remember when Donald Trump regaled us with braggadocio about the size of his, um, hands? Well, apparently he’s not the only person for whom his body parts loom large. Nor does Donald Trump have a corner on the market for bad behavior towards the less fortunate.

Well-placed sources tell Anglican Watch that Oran Warder, rector of St. Paul’s Episcopal in Alexandria, terminated the former head of the church preschool, an elderly woman near retirement, for allegedly making an offhand remark about Oran “throwing his dick around.” The termination came despite her apologizing for the remark, as well as the employee’s many years of service to the parish. It’s also worth noting that she actually worked for SPENDS, a separate legal entity with its own board, versus directly for the parish.

Before we go further, let’s call a spade a spade and recognize that women have been dealing with snide remarks, sexual harassment, and a glass ceiling for years now. Indeed, according to the Episcopal Diocese of Virginia, gender-based harassment is not actionable under Title IV (I have it in writing) and I know of one situation in which Shannon Johnston covered up an egregious case of sexual harassment by a priest. Not only is the priest in question still serving, but Johnston has adamantly refused to provide the pastoral response to the victim that is required under church canons. So much for loving, liberating, life-giving.

But in this case, the “victim” wear a dog collar, so the laws of lèse-majesté apply. Not only do church canons not apply to clergy, but the slightest whiff of disrespect lands you in the dog house, pun intended.

Of course, most of us would just laugh a comment like this off. Or accept the apology. Certainly, that is what Christ would have done. And he probably had to do it fairly often, hanging out as he did with prostitutes, tax collectors, and other undesirables.

But that’s allegedly not the case with Oran.

And instead of having the um, backbone to fire this person himself, he convened his rubber stamp vestry to do it. To my knowledge, not a single person raised an objection, asked whether this was the right thing to do, the kind thing to do, or if the healthier thing to do would have been to mediate the dispute.

Oran, the Pampered Prince of St. Paul had his precious little feelings hurt, and someone had to pay the price.

Of course, the real moral of the story here isn’t one specific decision to terminate someone, or the mechanics of how it happened.

Instead, it’s a tale of doing church, versus being church.

Of saying one thing, and acting another.

It’s talking about seeking justice and peace with all persons, but firing individuals over inconsequential slights.

It’s about a role model in which Oran gets his way, without regard for the hurt it causes another person.

It’s about a church that talks about being loving, liberating, and life-giving, even as it mistreats the less powerful.

It’s about setting an example of what forgiveness is not.

On a larger scale, it’s about a denomination that turns a blind eye to bullying by priests, to illegal conduct by priests, and more, yet comes down hard on laity for even small issues.

And it’s about a governance system in which vestries gobble up countless hours, yet in reality vestries are often nothing more than rubber stamps for the will of an often narcissistic rector. And far too many vestry members are chosen because they were willing to say, “Yes,” versus because they demonstrate the spiritual maturity one should expect of parish leaders.

It also raises the issue—if one of Oran’s children did the same thing, would Oran support a similar outcome? One suspects not, particularly given that his kids aren’t exactly over-achievers.

And at the highest level, this situation underscores the ethical bankruptcy of the Episcopal Church.

Finally, it is important to note that Anglican Watch does not have independent verification of these claims, although we have multiple trustworthy sources. Thus, these are all allegations, and nothing more.

Readers: Is this the sort of church you want to belong to? Or are you more concerned with larger issues of inclusion, fairness, and living the Gospel, versus talking about it?

Members of St. Paul’s, feel free to comment if anything in this story is not accurate.

The ECUSA acts as if God incarnated to convert the entire world into Liberal Democrats. I despise going to church and finding the Lord’s Prayer modified to suit feminists, rainbow flags flying over the Sunday schools and being told from the pulpit that it is my religious duty to support open borders. Feminists, homosexuals and illegal aliens, who are mostly Roman Catholic, will not fill pews but will fill pulpits to collect a paycheck.

Except that most of the people collecting the larger paychecks in TEC are still heterosexual white men. Most priests make smallish incomes. Also, I came from a conservative Evangelical background to the TEC, and Episcopal services. In comparison, are more traditional than the contemporary services in evangelical services. We enjoy lengthy scripture readings and I’ve never heard a feminist version of the Lord’s Prayer. We only say the traditional version along with traditional creeds. That’s not to say there aren’t SOME super political , far left churches out there in TEC. But they aren’t close to being a majority.