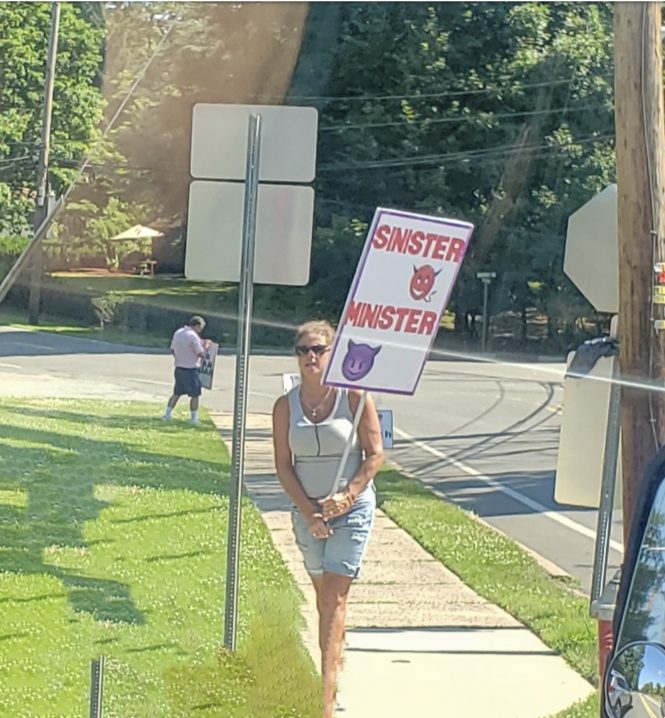 Last night, representatives of the Lombard Mennonite Peace Center (LMPC) met with the St. Paul’s Montvale dissidents. Sources close to the matter tell Anglican Watch that LMPC has recommended against further efforts at reconciliation with the dissidents due to their behavior and objectives, both of which are contrary to a negotiated settlement. Anglican Watch believes that is an appropriate outcome given the appalling, childish, hateful, and dishonest behavior we have seen from the dissidents.

Problems Anglican Watch has observed with the dissidents include:

Some of the attacks on Pastor Jill also are oddly disconnected from reality. These include:

And, of course, we have the fabrications that don’t even make sense, such as the claim that Pastor Jill closed the nursery school and left families in a lurch:

But then, intelligent is not the first word to come to mind with these folks.

Nor do we notice much self-examination and accountability from the dissidents and their friends. Many owe apologies, including Persia Barile, Joseph Wahler, Ginny Bartlett, Debbie and Jeff Piatt, and others. Yet not one has had the integrity to apologize. That speaks volumes about this bunch and their ethical worldview, or lack thereof.

We also find it particularly amusing when imbeciles like Joe Wahler trot out their MAGA hate-rhetoric on social media, but when we give it visibility, they threaten us with defamation and harassment. Sorry, Joe — if you’re man enough to publish it, you’re man enough to own it. Time to grow a pair and live with the consequences — which we seriously doubt will be an increase in business.

As things stand, Anglican Watch predicts that we will see criminal indictments among several of the dissidents, as well as tax fraud and other charges.

As for the Piatt’s attorney, he’s not helping their case much. Threatening a church that has been bullied over the past few years and demanding copies of complaints is likely to simply elevate tensions. Far better to sit down, asking the clients to tell the truth, then thinking of a path forward that benefits all parties would be a far better solution. And Anglican Watch is prepared to venture a guess that their attorney has received, at best, a selective recounting of events.

If nothing else, even today, when church attendance is no longer normative, threatening and bullying a priest and her parish is hardly going to be good for Montvale Landscaping’s business. Or, for that matter, any of the Piatt businesses, including Beet’s juice bar.

While we’re at it, let’s call a spade a spade: above is a reminder of Debbie Piatt and how she handles other people’s reputations. If we were Debbie Piatt (heaven forbid) we’d be worried about that bird coming home to roost.

Lastly, if we had not seen such appalling behavior from the Piatts and their minions, we’d remind all involved that there is always hope of repentance and reconciliation. But as it stands, we find the  words of the late Maya Angelou far more fitting: