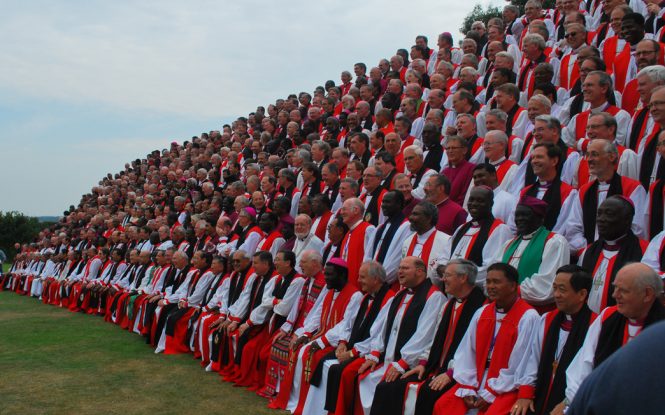 Editor’s note: Moments ago, Jon White, an editor with Episcopal Journal and Cafe, published an article on the uproar at Lambeth, found here.

As the once-a-decade meeting of Anglican leaders gears up at the Lambeth Conference, liberals within the Episcopal Church, the Anglican Church in Canada, and the Church of England are decrying efforts by conservative bishops to call for a vote banning same-sex marriage worldwide. But for many, the news coming out of Lambeth, even among inclusive bishops, is far from reassuring.

Consider: Episcopal Journal and Cafe, long an independent and inclusive voice for the American church, hasn’t even bothered covering the growing uproar over marriage equality.

“Our church is on record – both officially and in practice – with our commitment to the full inclusion of all who seek to follow Jesus and his way of love,” Curry said. “As we head to the Lambeth Conference, the same dedication leading us to the full welcome, embrace, and inclusion of LGBTQ+ children of God likewise commits us to communion with one another across our differences. We will be true to who we are while upholding our relationships and engaging in real and open conversation.”

That’s a curious statement, because many LGBTQ+ persons in the Episcopal Church do not feel they are equally included in practice.

Indeed, for many, the church is a threatening and sometimes dangerous place, as evinced by the recent study on sexual assault in the church. That study shows that LGB persons are almost twice as likely to experience sexual misconduct as cisgender heterosexual respondents.

Then we come to boots-on-the-ground issues. For example, Bishop Susan Goff of the Episcopal Diocese of Virginia says:

Again, be assured of our unwavering support for marriage equality in Virginia and across The Episcopal Church. Do not be afraid. Do not lose hope. I hold tight to trust that God’s love always prevails.

Yet, as previously reported, the consecration of incoming Bishop Mark Stevenson is being held at a venue that does not support marriage equality. That begs the question: Why is the diocese giving money to an organization that does not share its values? What message does that send to opponents? And why is the diocese only sending an email out about the controversy at Lambeth, versus a press release? Is it afraid to go public with its position?

Also troubling is the Episcopal church’s propensity for virtue signaling. Specifically, the one thing no one mentions, including the various bishops interviewed by the Episcopal News Service, is that the Lambeth Conference has no authority over the various provinces. None.

Thus, no matter how Lambeth votes, it’s all a tempest in a teapot. The conservative bishops can vote however they want and it won’t change a thing. TEC can still marry whoever it wants.

LGBTQ Spouses to the Back of the Bus

Meanwhile, while the American church carries on about diversity and inclusion, for same-sex spouses of American bishops, Lambeth is a case of separate and unequal. These individuals may worship with the group, but cannot attend spousal functions. Why? Because Welby didn’t invite them.

So, while the American church huffs and puffs, the reality is that it is meekly going along with discrimination, even as Curry bloviates:

“For now, I offer this message of love to all my LGBTQ+ siblings: We have worked hard to become a church where, as the old African slaves used to sing, “There is plenty good room, plenty good room,” for all of God’s children,” Curry said. “We are all The Episcopal Church, and we will not compromise who we are, our connections, or our love. We head to this conference with you in our hearts and Jesus’ Way of Love as our guide.“

On that issue, Welby and Curry need to grow a spine and take a stand. As in, “We will not compromise who we are, or our love. But if our connections try to force us to act in ways that are unethical, they will no longer be our connections.” That’s the Way of Jesus. And for the record, excluding same-sex spouses is wrong and unethical. Full stop.

In other words, would Curry say, “We don’t want to offend our friends, so we’ll agree to ride in the back of the bus,” if the issue were race? We think not.

Meanwhile, we have seen no movement on demands that incoming bishop Mark Stevenson move his consecration to a venue that affirms marriage equality.

Hypocrisy, thy name is Episcopal.