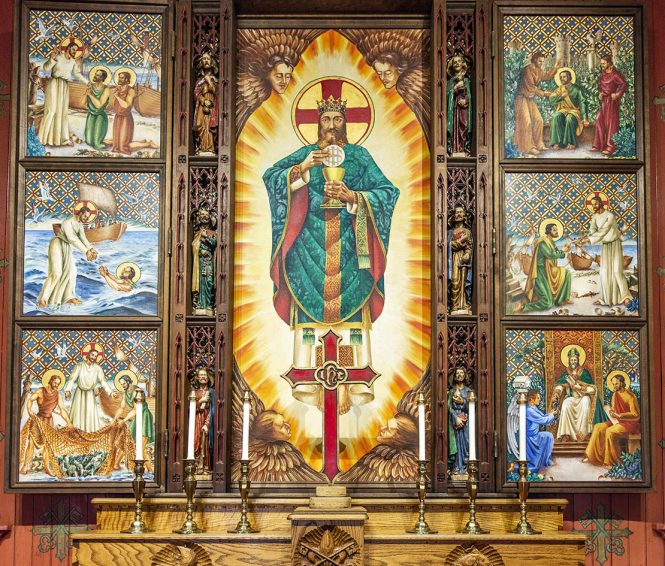 Years ago, my family and I often spent much of our summer on Long Beach Island, one of the barrier islands off the coast of South Jersey. Those were delightful years, the sort that make me smile, even now.

Just a few years before I was born, a big hurricane had breached the island in several places, leaving several large swaths that had been filled in, marked by flat expanses of sand and dune grass. And while the south of the island was more developed, complete with the requisite ice cream stands, souvenir shops, and putt-putt golf, the north end of the island was far less touristy.

We spent most of our time on the north end of the island, marked by the Barnegat Lighthouse, affectionately known as “Old Barney,” which had guided mariners since well before the civil war. Fishing was tremendous fun, as was watching the annual progression of the then-plentiful horseshoe crabs, living relics of prehistoric times, as they came ashore to breed. And it was a thrill to approach the ocean, guarded by the high dunes, the blazing white sand typical of beaches in the area, and the roaring sounds of the ocean winds  and crashing breakers.

But nothing was more special than visiting the tiny Episcopal church of St. Peter’s at the Light. Built in a cedar shingle style reminiscent of the shore, the church spelled of salt air, beeswax, and the cedar trees around it. And in many ways the church represented the Episcopal Church at its best, for a typical Sunday service included everything from older professionals, resplendent in their Sunday best, to surfers who wandered in, probably more to get out of the broiling hot sun than anything. And while my parents didn’t attend, I have wandered in many times over the years, invariably feeling like I had walked into an old, beloved home.

Particularly lovely was the triptych behind the altar. Gothic in style, it was painted in keeping with the ancient church 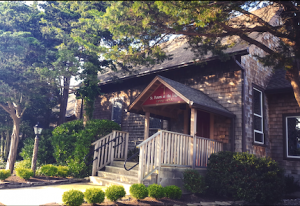 tradition of including local references in church art. This included a painted depiction of Old Barney, standing discreetly in the background as Jesus speaks to his disciples, the fishers of men and women. Other panels reflect the flora and fauna of the area, lending an immediacy and comfortable familiarity to the otherwise formal area behind the altar.

And so it was with delight that it recently occurred to me to remember the church in my will. The idea was that the church would be the so-called “remainderman,” meaning that in the event my husband doesn’t survive me — a likely possibility given the disparity in our ages — everything would go to St. Peter’s. And having not had children, and having been remarkably frugal over the years, the amount probably will be a tidy sum.

True, no one at St. Peter’s at the Light knows me today. In fact, I haven’t been to the island in years. But after so many years of offering a comfortable place of respite and spiritual tranquility, the notion of a pleasant surprise for the church seemed delightful.

Wanting to Provide a Pleasant Surprise

The news probably came as a surprise to some, for several years ago, after a falling out with my former rector, I rescinded a similar provision that would have left everything to that church. Thus, I’ve been wandering around for several years, with no family to inherit when I am gone, and no real plan B. Being a former attorney, that in itself is enough to make me cringe.

Knowing that many churches have endowments for such purposes, or have an established point of contacts for bequests, I wrote to the church to learn more. In fact, I wrote to the parish administrator and the rector, for a total of three times.

Needless to say, St. Peter’s at the Light won’t be included in my will, and I doubt I will ever again visit. Indeed, the “All Are Welcome” sign in front seems profoundly ironic when the welcome doesn’t even extend to answering email—and that leaves the church’s self interest in doing so out of the equation.

And course I don’t know the reason for the deafening silence. Perhaps my email went into a spam trap. Perhaps the several lawsuits I have going against my former church played a role. Maybe folks just couldn’t be bothered.

But  the moral of the story isn’t the failings of St. Peter’s, its rector or staff.

The real point here is that, at a time when the Episcopal Church is in precipitous, perhaps terminal decline, it’s the little things that matter. Responding to email is a necessity. Being polite to newcomers and sincerely interested in them should be normative. And the petty fun and games that too often goes on behind the scenes in churches is killing the Episcopal church from the inside out.

Nor are my observations limited to St. Peter’s at the Light. I know of quite a few churches, including the one I previously dropped from my will, that utterly ignore requests to be added to email lists, brush off requests for information, or tell folks who are differently abled to get lost (more on that in a story later this week). And there is whole, “Thanks for volunteering, but that committee is full,” passive-aggressive routine in many churches.

That’s not to say that challenges are solely on the side of inaction.

I vividly recall one church near me that I visited several years ago. The building was architecturally odd, the service profoundly uninspiring, and coffee hour after the service was excruciating, even for me — and I love being around other people.

But after doing my best to be pleasant to others and try to fit in, I left coffee hour for a few hours shopping at a nearby mall. Imagine my surprise when I got home, to discover a note of welcome and loaf of homemade bread from the church. Indeed, I am all about getting things done, but the speed of the welcome — not to mention the access to my otherwise secure building — creeped me out big time. Yes, the intent was good, and the church probably has some wonderful volunteers, but the response was a little over the top. And based on what I now know about that parish, my decision not to again attend the church was prescient.

In short, the Episcopal Church is in a phase of profound loss, one that may well end in its collapse. But it doesn’t need to add to the loss through its bad day-to-day decisions.

It is interesting to observe parishes around me in the San Fernando Valley, California. Many started in the fifties. The vicar of a small mission would walk around the neighborhood and invite people to worship. The congregations grew, church buildings were built, they grew and grew and then stopped growing. And are now shrinking. I went to one, determined to enjoy a church season, and my third visit there I was challenged as I entered my pew. My name was demanded by the Senior Warden. She then said, “We know who you are!” And she left me. I continued to worship there, mystified, of course. But, I wanted my child to go to Sunday School and the teacher was great.

Parishes are incredible at rejecting possible parishioners. It isn’t a mystery to me. They want to keep the parish just as it is. So, they don’t want me there. “We know who you are,” simply means that I am the embodiment of change for a jewel that I will never be a part of. And so parishes die.

By the way, my family went to Beach Haven every other summer. Do you remember running behind the trucks that sprayed mosquito killer down the streets? A big cloud of it would blossom behind! All the kids seemed to do this and lost some brain cells, my guess is!

Ha! Yes, I loved the mosquito trucks. In fact, that probably explains a lot about me 😉

PS My old digs, Grace Church in Alexandria, is doing much the same. I know several people who have signed up for their email list, only to be ignored. Maybe they are worried that some of their secret gnosis will leak to us heretical sorts.

Hi Kay. I don’t question whether the parish is loving; indeed, that is why I planned to remember the church in my will. But neither my email to the parish administrator or to the vicar was answered. And the point is that it is exactly that sort of brush-off that causes long-term problems for churches. Indeed, with the church being closed during the pandemic, there is all the more time and all the more reason to respond to inquiries. 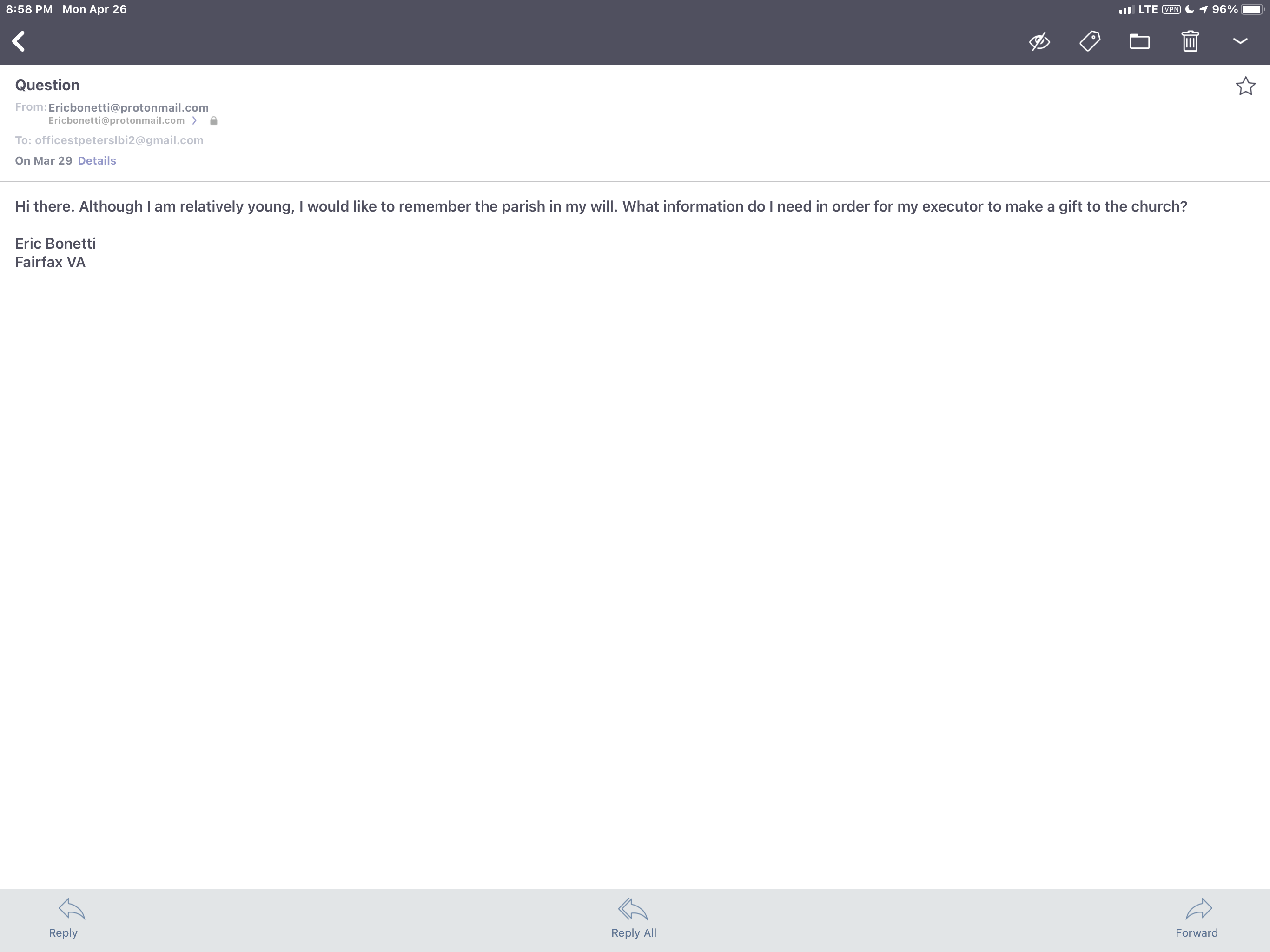 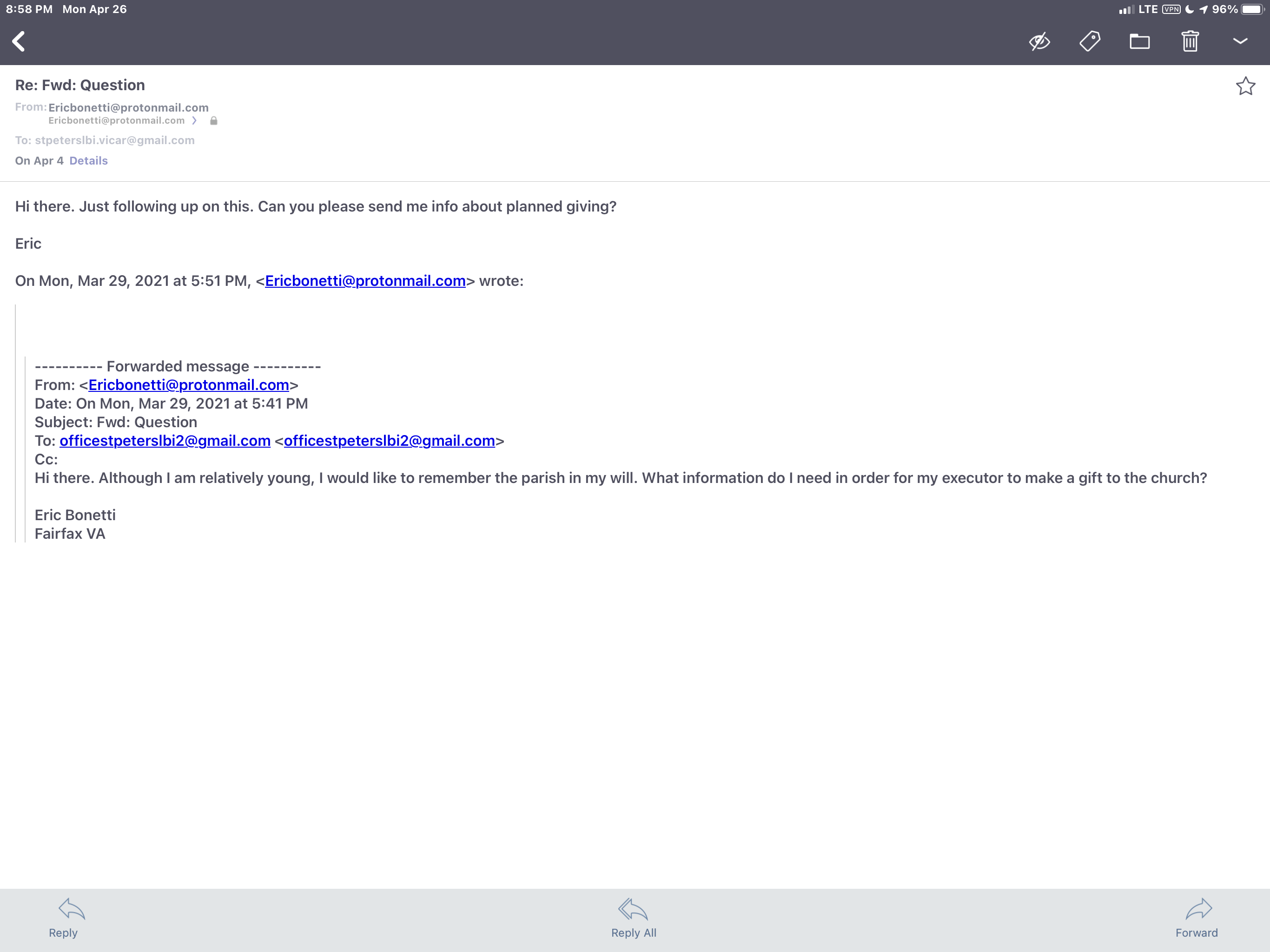 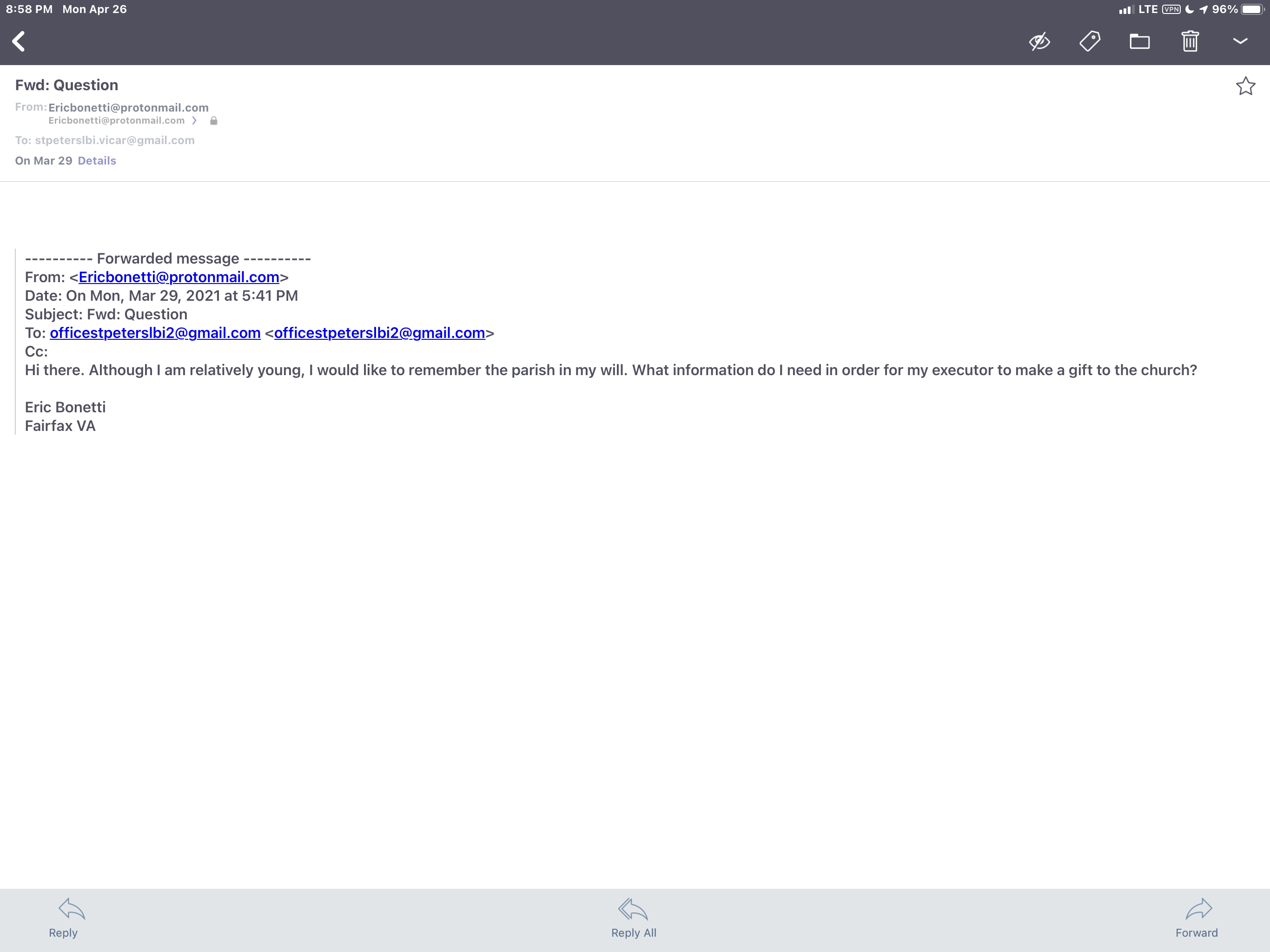 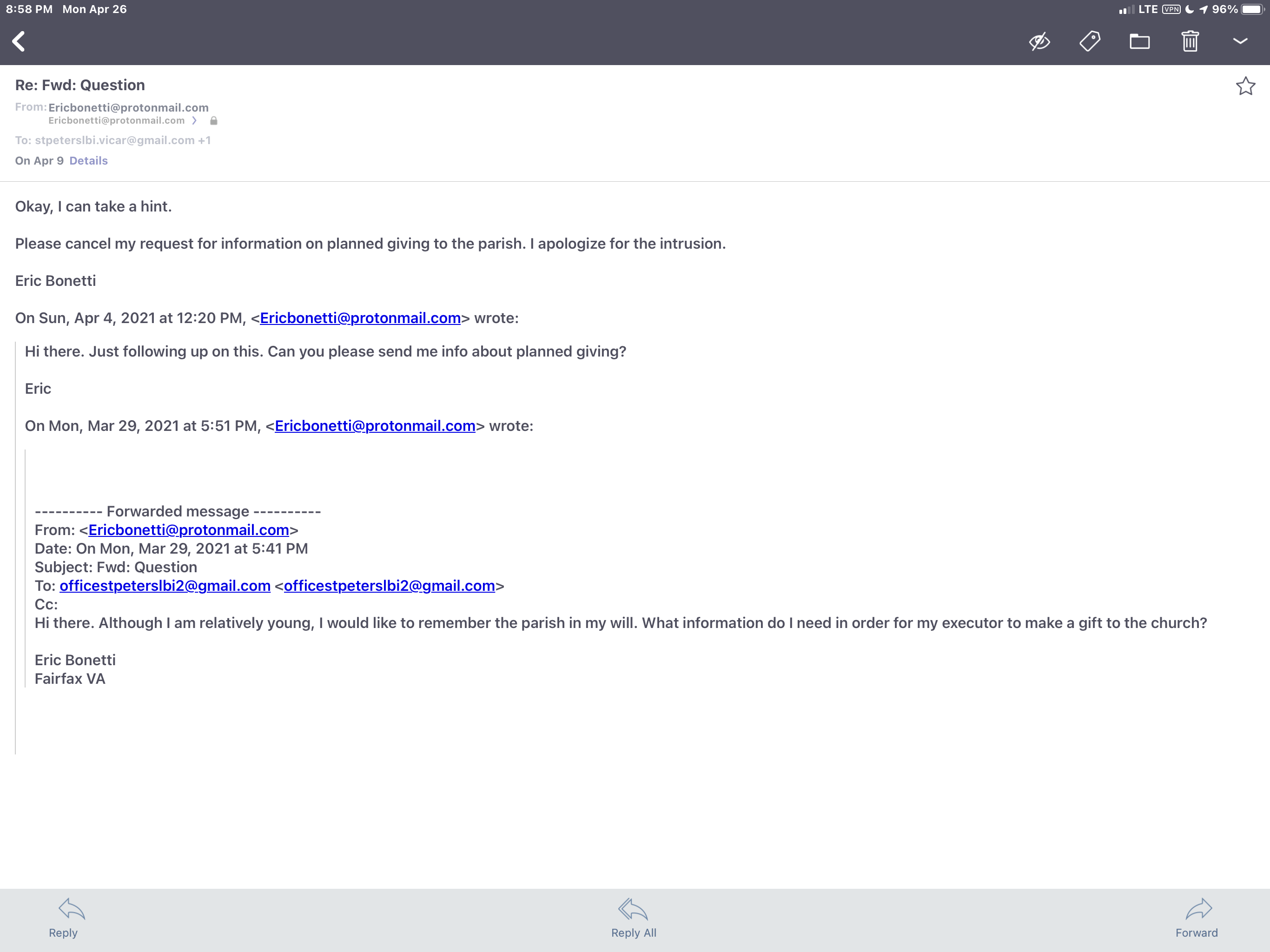