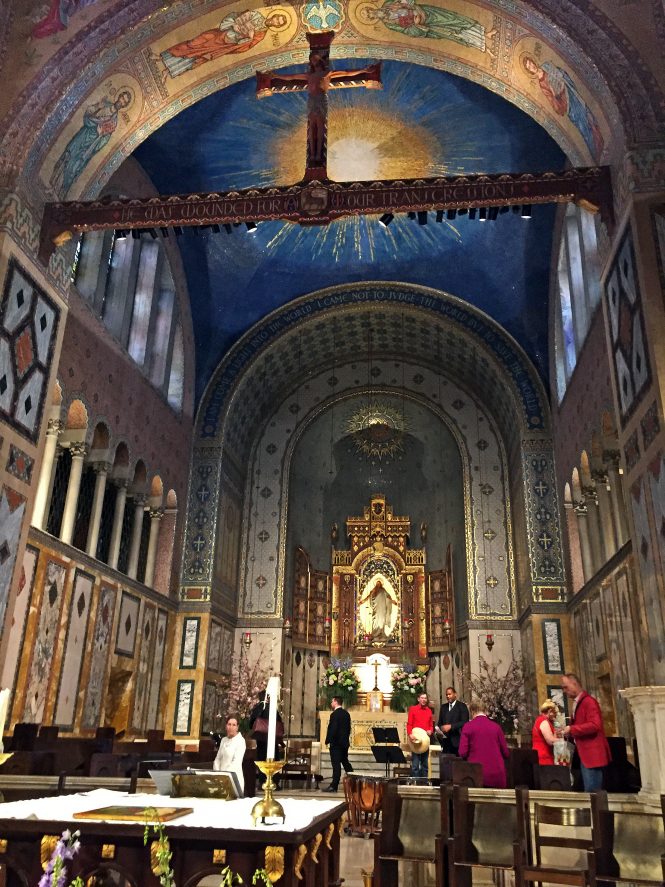 Apparently, it’s not just wealthy persons in Los Angeles who don’t want the homeless living in their neighborhood. Following his recent remarks in support of removing a homeless encampment near diocesan headquarters, Episcopal Bishop of Los Angeles John Harvey Taylor appears to have a bad case of NNMC, or Not Near My Cathedral.

The issue arises from the removal by heavily armed police, in riot crowd control gear, of an encampment at Echo Park, amounting to approximately 200 tents. The city went on to proudly announce that roughly 120 of those evicted had been lodged by the city, while remaining silent as to the fate of others.

Not Near My Cathedral

Of course, no sordid mess is complete without an Episcopal bishop wandering around afterwards in purple clericals, much like the British monarchy on a walkabout, and on that score Bishop Taylor didn’t disappoint. Per the LA Times:

On Thursday morning, Bishop John Harvey Taylor toured the lake, which is across the street from the headquarters of the Episcopal Diocese of Los Angeles where he is based. He later told me he’s not choosing the side of either “our housed or unhoused siblings,” but he said there’s clearly been a breakdown when homeless people call a park their home.

“Political leaders need to step up to the plate,” Taylor said, and create a network of sanctioned and secure encampments on the properties of nonprofits, churches, and underutilized or abandoned publicly owned facilities. That’s not a preferred or permanent answer, he said, but a more humane way to move forward.

“I do not happen to believe that every citizen has a right to be in a park and live there,” Taylor said, “in part because the park is for the entire community and ultimately you cannot have it be an overnight residential community. And that’s not the fault of the unhoused, it’s the fault of the city.”

What About Personal and Organizational Accountability?

First, we see the typical Episcopal effort to have it both ways, with Taylor saying he’s not taking sides, even as he lauds the armed eviction of the homeless. All I can say is if that’s his idea of neutrality, may God help us all.

Second, we come to the logic of the thing. Taylor calls on the city to organize an interim network of shelters, including churches and nonprofits, but what’s stopping him from doing exactly that himself? Episcopal visits are on hold during the pandemic, and surely the bishop’s piggy bank, the Corp Sole, has plenty of money in it to send out a few thousand emails and printed materials, even with the failure to sell the St. James property out from under the parish. And what better place to hold a socially distanced meeting of community leaders than the now largely empty St. John’s Cathedral? Heck, throw a little liturgy into the mix, and Taylor can even parade around in miter and chasuble and impress the little people. How cool is that?

Third, we come to the example of Jesus, and that is a damning issue indeed.

Jesus welcomed the poor and the downtrodden, those at the very fringes of society.

But not Bishop Taylor. He wants that park looking good, the fountain looking spiffy, and everything neat and orderly. After all, what if the Corp Sole wants to sell something in the area to a developer? Can’t have those nasty homeless people messing things up when there are condos to be built.

In short, somehow I doubt Jesus cared much about how the park looked, or what people thought—he cared about those who were lost and destitute, even giving his life for them.

Meanwhile, the problem of homelessness in Los Angeles is enormous and exploding exponentially. Per the Los Angeles Homeless Services Authority (LAHSA), there are a total of 83,347 persons in shelters or the streets on any given night. The total homeless number of persons homeless in any given year is in excess of 250,000 people, and the number is expected to increase by 400 percent over the next four years.

That situation is exacerbated by the city’s past policy of concentrating the homeless in skid row, an area of about 50 square blocks. This leads to an increased incidence of violence, substance abuse, and infectious disease, while resulting in a shortage of employment opportunities.

Additionally, the extended military action in Afghanistan and the Middle East has lead to approximately 20 percent of skid row residents being veterans, with many suffering from PTSD and substance abuse issues.

Meanwhile, the brutal pandemic rages on, disrupting society and placing the homeless at ever-increased risk of death and suffering.

And let’s not forget that our homeless sisters and brothers typically don’t wish to be homeless; most would prefer to live in comfortable, secure surroundings. So it’s not like this is a case of spring break, LA style. These are people in dire need, and +Taylor’s comments rankle.

To be fair, the Diocese of Los Angeles does have a Housing Justice Task Force, formed last June. And +Taylor correctly noted in that context, “We can’t delegate compassion to government or anyone else.”

As far as I can tell, the task force is a good idea and comprises leaders from across the community. But in true Episcopal fashion, much of the work contemplated is far down the road, including building facilities on church land, forming partnerships with developers, and more. And if it’s anything like the Episcopal Diocese of Virginia, which held listening sessions on racial reconciliation five years ago and has yet to do anything with the results, the Episcopal Church will have collapsed into the dustbin of oblivion long before any of this gets off the ground.

Meanwhile, you may be assured many a Saturday afternoon will be filled with dithering over which letterhead to use for the task force, whether it’s appropriate to hold meetings during Holy Week, and all the other hoo-ha that Episcopalians dream up, even as they wander around on Sunday, smug looks on their faces, and tell themselves they are doing great things. Yes, it’s the Baptismal Covenant in action!

In the near-term, I may have missed something, but I note that the massive bronze doors of St. John’s Cathedral appear to remain closed at night, even as the homeless sleep on the streets. Unpleasant smells and dirt in the cathedral is the issue, I’m prepared to bet. Or the fear that someone will wander off with some of the Cathedral’s BST’s (that’s Episco-speak for ‘bright shiny things,’ or the trinkets that adorn altars and sacristies to impress the faithful.) If nothing else, the night the homeless camp was forcibly removed would have been a good night to open the doors and welcome those in need.

In short, I’m prepared to offer Bishop Taylor the benefit of the doubt over the long-term, even though the Episcopal Church only appears to have about 15 Easters left before it collapses of its own rot.

But in the meantime, I’m not exactly impressed.

Thank you John. Very happy to call out injustice in this small corner of cyberspace, particularly when it comes wrapped in the vestments, trappings, and decaying glitter that too often undergird the organized church, even as it bloviates about the baptismal covenant.