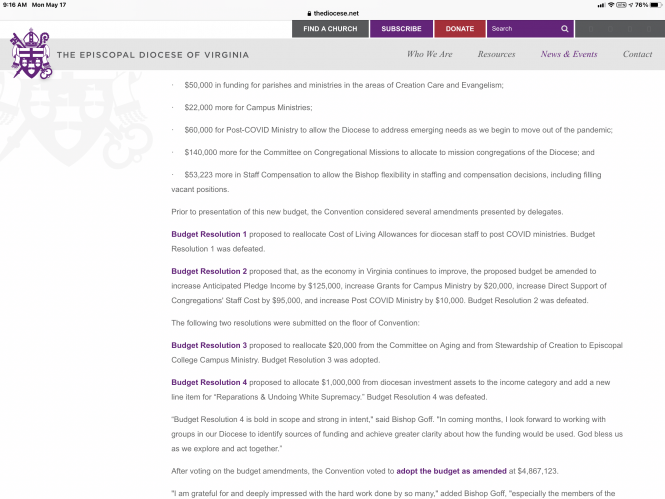 The more things change, the more they stay the same. That’s often a true statement, given our propensity as humans to prefer the comfortable and known, versus change and the unknown. But it’s nowhere more true than DioVA, where the recent passage of an annual budget — one quarter of the way into the new budget year — underscores the fact that meaningful change is well neigh impossible for the Episcopal Church.

In particular, I am thinking of the wonderful resolution “Reparations and Undoing White Supremacy” that reached the floor of the special convention, which called for the diocese to draw $1 million from diocesan investments to begin paying reparations and to end white supremacy.

The motion, which was championed by a young adult missioner shared with the ELCA and a smattering of parishes across the diocese, predictably enough was voted down. But the gesture carried larger significance and context that should send a wake-up call through the church.

First, the motion comes on the heels of a report on structural racism in the church. The findings of the report were breathtaking in their scope, but key for this discussion was the observation that the church far too often thinks in terms of transactional “solutions,” like book groups, film series, or changing hiring practices, when what it needs to do is to think in transformational terms.

That observation resonates with me, and not just for race. My observation is that far too often church members watch a movie, or attend a lecture, or go to a book study, and leave feeling all smug and churchified, while internalizing nothing. Indeed, I have on many occasions seen church members leave church and, just a few blocks down the road, flip someone off, while seeing nothing wrong with their behavior.

Thus, the recommendation took seriously the recommendation of the anti-racism task force, and asked the diocese to actually do something, versus simply remembering to honor MLK day or include racism in the prayers of the people. Or, heaven help us, holding yet another listening session on race, as happened five years ago with nothing to show for it.

Second, the recent brouhaha with the Trustees of the Funds in DioVA was in part driven by the desire of diocesan officials to raid the investments for operating expenses. That’s a stupid move, particularly when the diocese already is far too bloated. Yes, budgets are declining, but the diocese has far too many people hanging out at Mayo House, doing very little, even as the antediluvian, antebellum heap that is Mayo House (sometimes referred to as Tara for its similarity to a plantation) gobbles down inordinate amounts of fossil fuel and resources. In other words, yes money is tight to support the current paradigm. But folks see little value in the diocese, which does next to nothing, even as it asks for pledges from its parishes of up to 17 percent of operating income.

That said, if Goff and her lackeys are going to raid the investments, there’s no better reason than to fight white supremacy. Indeed, I suspect if the diocese took meaningful steps to actually do something about the issue, it would promptly see an increase in funding sufficient to offset the draw on reserves. That is, if doing something meant actually pushing for change —- like paying for public service ads, or a social media campaign, versus holding yet another inward looking, feel-good event.

Thus, the recommendation to use the investments for something other than subsidizing the same ‘ole, same ‘ole calls Goff’s bluff, and underscores the hypocrisy of the diocese.

Third, the message was not lost on Goff or her minions. Indeed, Goff felt compelled to resort to the time-honored strategy of praising and diffusing the proposal, saying:

“Budget Resolution 4 is bold in scope and strong in intent,” said Bishop Goff. “In coming months, I look forward to working with groups in our Diocese to identify sources of funding and achieve greater clarity about how the funding would be used. God bless us as we explore and act together.”

In other words, great idea, but it ain’t gonna be our money, and we’re going to push it down into committee, where it will die a slow, quiet death, safely distanced from the episcopacy. But I reserve the right to use the measure for purposes of virtue-signaling, so I can tell folks that the church is committed to ending racism.

It’s also worth noting that the traditionally progressive parishes, like St. Anne’s in Reston, appear to have largely taken a pass on the measure. Yes, the measure was in part a theatrical statement, but the underlying message is important, and the measure could have been a starting point for meaningful change.

My profound hope is that the proponents of this measure will not allow themselves to be brushed off, but instead will insist that Goff and her minions take the matter seriously, and not be allowed to shove the matter into committee, never to be heard from again.