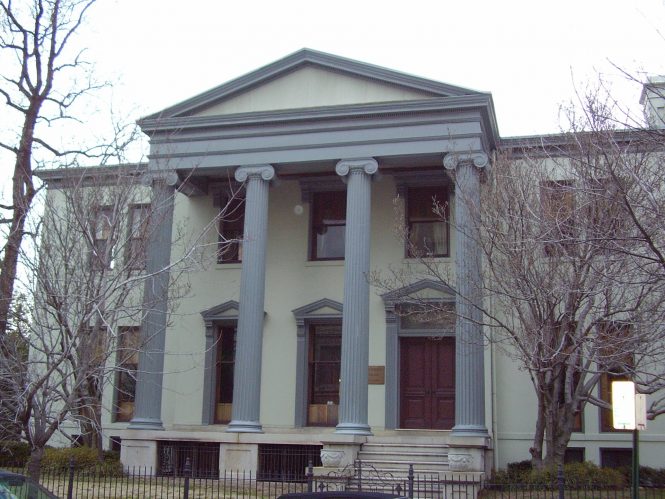 As some know, there is a Title IV case publicly under way in the Episcopal Diocese of Virginia. Title IV is the church canon that establishes standards for clergy discipline.

The case is noteworthy and curious for a variety of reasons, not the least of which is that it illustrates just how badly Title IV is implemented in the Diocese of Virginia, as is the case in many dioceses.

One of the most striking things when one first reviews the publicly available Title IV documents in Lura’s case make is just how lacking in transparency the Title IV process is. So much so that it’s difficult to determine the facts behind the dispute.

But the fact that there is a hearing panel proceeding under way in Lura’s case is itself telling, because most proceedings are handled by mediation, private negotiations between the bishop and the respondent, or other informal means.

So, this is a conflict that has legs, and it looks like Lura is not going down without a fight. More power to her.

What we do know is that Lura served as vicar of the Church of the Incarnation, located in Mineral Virginia. Being a vicar means that the church is a mission of the diocese, with the vicar ultimately reporting to the bishop. This differs from being a rector, which means that the priest serves as church that has become a parish, or self-sustaining.

On October 24, 2019, Bishop Susan Goff notified Lura that her contract as vicar, set to expire on December 1, 2019, would not be renewed.

In the letter that was part of the announcement, Goff asserted that Lura had been a divisive force in the church during her time as vicar and instructed her to comply with the diocese’s policy on retiring priests, which includes restrictions on discussing parish business with vestry members after the priest leaves her position.

Subsequently, the diocese brought Title IV charges against Lura, asserting that she had violated the pastoral directive by contacting the church’s vestry, attempting to negotiate a new contract, and threatening to sue the diocese.

Before we go further, it’s important to note the we don’t know the full story, and Lura’s attorney did not respond to an email from Anglican Watch asking for comment.

From the pleadings, we know that Lura did discuss strategies for her reappointment as vicar with vestry members approximately 10 months after leaving her position as vicar. Thus, no matter how she or her attorney posture things, she violated Susan Goff’s pastoral directive. No doubt about it.

Okay, so Lura trampled on the bishop’s toes. She ignored Goff, and her conversation with the vestry was misguided, disrespectful, and a violation of her ordination vows.

In other words, she engaged in behavior that closely models that of Susan Goff and other diocesan leaders.

Let’s start with the source of Goff’s authority, which is church and diocesan canons. In that realm, Goff and the diocese consistently feel free to ignore church canons.

For example, Canon 27, section 4 provides that there shall be at least two intake officers, one male and one female. Yet for a very long time, the only intake officer was Caroline Parkinson. Similarly, Sven vanBaars was the only intake officer for roughly a year. A few weeks or even a month or two is understandable, but suffice it to say if this were a for-profit, someone would have been fired long ago for nonfeasance.

Similarly, Title IV.8 mandates a pastoral response, any time a complaint is made to an intake officer, even is the case is dismissed. This is not the same as pastoral care, but may include it, and should seek to promote “healing, repentance, forgiveness, restitution, justice, amendment of life and reconciliation among all involved or affected.” 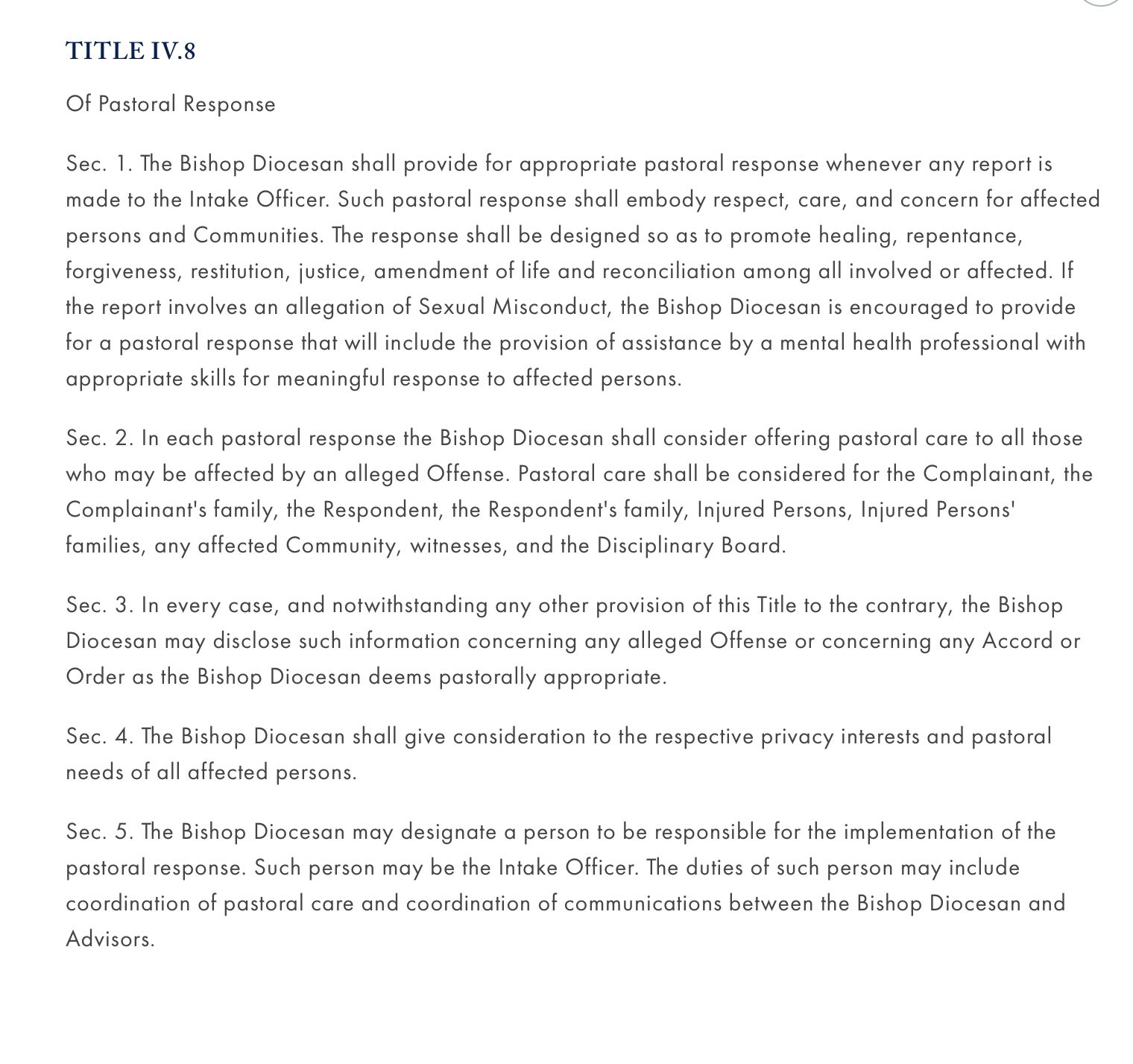 This care should continue for as long as needed.

Yet Susan Goff and the diocese routinely ignore this requirement, including in the following cases:

Nor are the consequences of ignoring this requirement inconsequential. As noted in the national church’s website on Title IV notes, failure to adequately care for persons involved in a Title IV case often results in the departure of persons from the church. In other words, ignoring these provisions is the ultimate in divisive, disruptive conduct.

Here’s what a report to General Convention had to say in advocating for better Title IV training:

Nor are the problems with Title IV confined to the diocese’s habit of ignoring the canons when it so suits. There also is the issue of organizational dynamics — specifically the propensity of bishops to look out for each other and the organization, with no way to deal with a bishop who has already made up her mind.

Specifically, the reference panel, or group that refers a Title IV complaint for further action, typically comprises the bishop, the intake officer, and one member of the disciplinary committee.

In Lura’s case a different bishop is heading up the Title IV proceedings, on the grounds that Goff has an inherent conflict of interest.

But again, the the reality is that the bishops — AKA members of the Pointy Hats Club — tend to look out for each other. And if a bishop decides to dismiss a complaint, there is no meaningful appeal. Yes, one can file an appeal to the president of the diocesan disciplinary committee, but you can bet your bottom dollar that the bishop and intake officer — who have already made up their minds and typically already have a collegial relationship — are going to ignore any adverse recommendation coming from the third member of the reference panel.

In other words, the power dynamics are entirely one-sided, with the bishop holding all the cards. Goff can ignore the canons with no consequences, but the same right is not extended to Lura or others who engage in lèse-majesté.

It should also be noted that Lura’s version of events may well differ from that of Susan Goff. In her pleadings, she attempts to have various documents entered into the record—efforts that the Hearing Panel rejected.

Bottom line, I probably don’t agree with Lura’s conduct. But then, given the conduct of the diocese over time, I have a far larger problem with the diocese and its behavior.

Meanwhile, Lura appears to be persona non grata in the Episcopal Diocese of Virginia. But given recent issues in the diocese, Lura may be better off that way.

Note from editor: We have received several comments from members of the parish and will run one or more updates on this story in the coming days. All involved are welcome to comment — you need not provide a real name in order to do so.

Have you looked into the matter of the title IV action that is occurring in the Diocese of Alabama against the Rev. Dr. Tommie Lee Watkins, the only openly gay, African American priest in that diocese. Let me know and I will update you.

We would love to get details. Is there a good time to connect? Feel free to use the online form to send us secure communications.