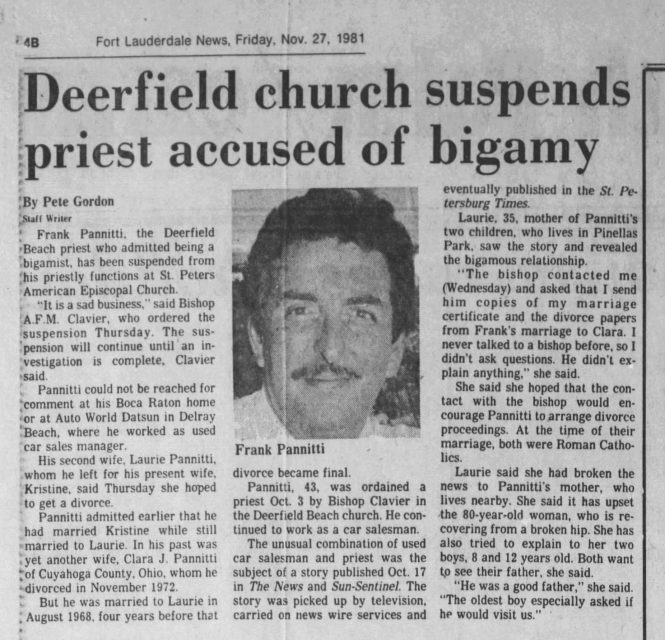 Frank Pannitti of the “American Episcopal Church” (which is not The Episcopal Church with headquarters at 815 Second Avenue) was suspended by Archbishop Tony Clavier in late 1981 when it was revealed that Pannitti thought two of his ex-wives had taken care of divorce paperwork when he married a third woman. His double bigamy was reported widely in Florida newspapers and by the Associated Press. Pannitti never attended seminary before his 1981 ordination but served briefly with convicted child rapist priest Sterling Rayburn and serial fraudster Walter Crespo on Clavier’s watch. Pannitti changed jurisdictions, founding E-Z Rent A Car in Oceanside, California in 1996 with his fourth wife while rector of Christ Our Savior Anglican Church (Holy Catholic Church Anglican Rite). Pannitti was serving in a parish of the Episcopal Diocese of San Diego in 2005 when Bishop James Mathes contacted the rector to inform him that Pannitti could not function sacramentally or receive a salary from The Episcopal Church.

The parish, under the Rev. Keith Acker, then left The Episcopal Church and affiliated with the Anglican Province of America. The new congregation received greetings and blessings from Bishop Keith Ackerman, then President of Forward in Faith North America, and then-Bishop Robert Duncan, Moderator of the former Anglican Communion Network (now retired primate of the Anglican Church of North America). Pannitti was a principal in Crespo’s Anglican Foundation, Inc., incorporated in Menifee, California on January 26, 2005 and suspended by the California Secretary of State in 2007. It received a California Franchise Tax Board Suspension on November 3, 2014.