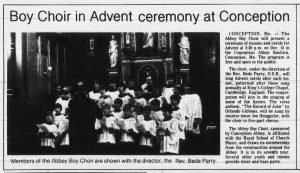 In 2011 Episcopal priest Bede Parry resigned his Episcopal Diocese of Nevada church positions, admitting to the Kansas City Star “that he had had sexual contact with five or six of the choir members as well as a student at a Minnesota university” when he was a Roman Catholic monk-priest based at Conception Abbey in Missouri. Parry subsequently worked for a Lutheran church in Nevada as organist and choir director. In 2000 Parry took a psychological test for his employer, All Saints Episcopal Church in Las Vegas, that showed him to be “a sexual abuser who had the proclivity to reoffend with minors.” Parry acknowledged the test results which were retained in his personnel file.

Parry was then received as a priest into the Episcopal Church in 2004 by Bishop of Nevada, later Presiding Bishop, Katharine Jefferts Schori. Parry was forthcoming during this process about a 1987 incident at Conception Abbey. According to The Episcopal Church Office of Public Affairs:

Parry was examined by the Commission on Ministry as required by the Canons and was recommended by the Commission on Ministry.
Parry’s reception as an Episcopal Priest was approved by the Standing Committee as per the canons.
As Bishop of Nevada, the Presiding Bishop followed all policies, procedures and practices. She insured that Safeguarding God’s Children, a program for preventing and responding to sexual abuse in children, was standard practice and was an integral part of parish work and ministry.

In consultation with other diocesan leadership and the chancellor, we explored the possibilities and liabilities of receiving him. I wrote to the Roman Catholic Diocese of Las Vegas and the Diocese of Santa Fe, receiving brief responses from each bishop, who indicated no problematic behavior. I wrote to Conception Abbey, from whom I received only an acknowledgement that he had served there, been sent for treatment to a facility in New Mexico, and had been dismissed for this incident of misconduct. Neither then nor later did I receive a copy of any report of a psychological examination in connection with his service in the Roman Catholic Church. His departure from the Roman Catholic priesthood had to do with his desire to take up secular employment. I made the decision to receive him, believing that he demonstrated repentance and amendment of life and that his current state did not represent a bar to his reception.

Abbot Gregory Polan of Conception Abbey indicated in media interviews that he had informed Jefferts Schori of Parry’s “repeated offenses” in the course of his reception process in Nevada. He indicated that he also discussed Parry’s proclivity to reoffend. 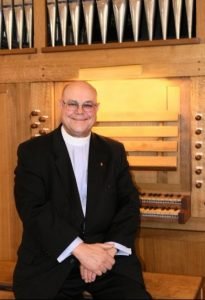 Parry apologized for sexual activity with minors aged 7-18 and individuals in his pastoral care between 1973 and 1979, and with at least one student at St. John’s University School of Theology in Collegeville, Minnesota between 1979 and 1982. Parry was accused in a June 2011 lawsuit of having sexually abused a boy who was attending a choir camp at the abbey in the summer of 1987. In a July 2011 lawsuit Parry was accused of sexually abusing a boy beginning in 1982, over an 18 month period. The accuser said he was 14-15 years-old at the time, and a piano student of Parry’s, as well as a boys choir member. Roman Catholic Archbishop Jerome Hanus of Dubuque, Iowa, resigned two weeks in advance of his scheduled deposition in these cases. There is no record online of whether he was deposed from the priesthood before his death from a heart attack in 2013. Neither civil lawsuit was resolved. 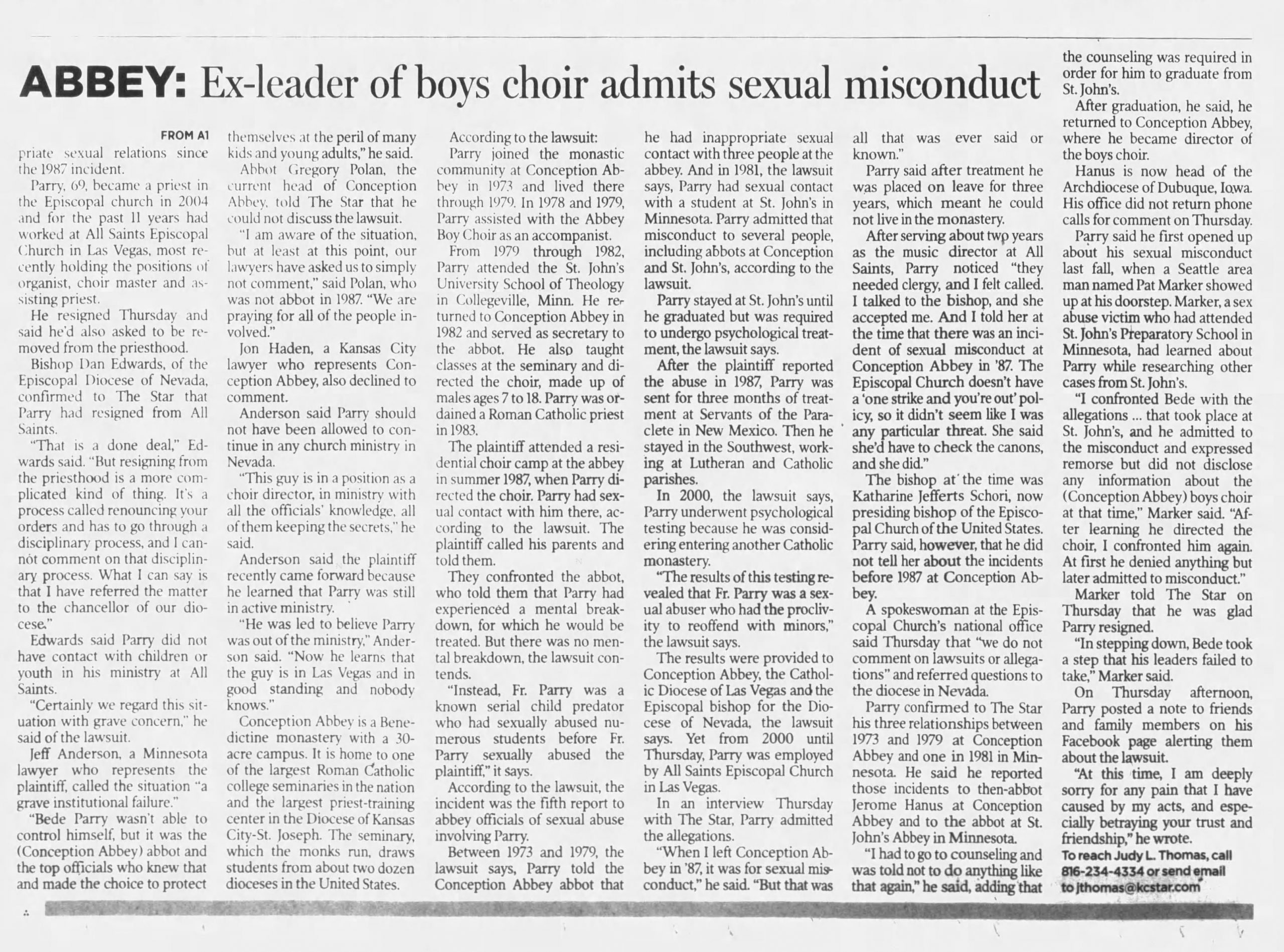