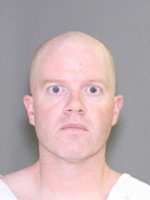 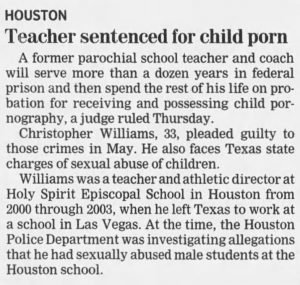 In December 2003, Texas charges of sexual assault of children at Holy Spirit Episcopal were filed against Williams. The same month, Las Vegas FBI agents searched his home and computers. Williams was arrested in January 2004.

U.S. District Judge Keith Ellison sentenced Williams to 12 years and six months in prison on the child pornography charges, followed by a life term of probation. Judge Ellison required Williams to register as a sex offender, to be barred from contact with children under 18, and to be prohibited from using a computer without court permission.
In January 2006, Williams pleaded guilty in the 178th District Court of Harris County, Texas to two counts of aggravated sexual assault of a child under age fourteen, two counts of sexual performance by a child, two counts of indecency with a child by contact, and one count of indecency with a child by exposure at Holy Spirit Episcopal School. The state court assessed Williams’ punishment at ten years’ confinement for the indecency with a child by exposure offense and one of the offenses of sexual performance by a child, and twelve-and-a-half years’ confinement for the other five offenses, to run concurrently. Each of the state judgments of conviction included a special instruction that the sentences “are to be served in a Federal Institution to run concurrent [with] the previous 151 month sentence in [the] federal case.”
In 2008, one victim sued the Diocese of Texas, Holy Spirit Episcopal School, the Episcopal Church of the Holy Spirit, the diocesan council, and Carolyn Trozzo, head of school, for civil responsibility.
In September 2015, Williams was granted parole in his federal cases and neared the end of the sentences in his state cases. Texas petitioned to have Williams declared a sexually violent predator under the SVP Act. Williams appealed his lifetime sexual predator designation on procedural grounds. Psychiatric evaluations determined that Williams “is exclusively attracted sexually to prepubescent males” and overruled his appeal on November 30, 2017.
https://www.chron.com/news/houston-texas/article/Ex-Houston-teacher-gets-12-years-over-porn-1914285.php
https://www.myplainview.com/news/article/Former-teacher-given-prison-for-child-porn-charges-8621749.php
https://www.bishop-accountability.org/news2008/07_08/2008_08_08_Lezon_AbuseLawsuit.htm