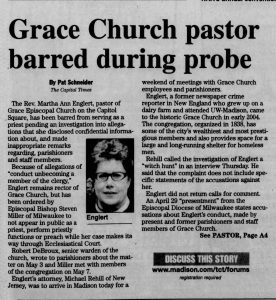 Subsequent to her Title IV case, Englert now serves as a dorm parent at the Oliverian School, an alternative education school for girls where classes are often one-to-one. Her bio conspicuously avoids mention of her stint with the Episcopal church. The opportunity was recommended to her by a contact at the Tabor Academy in Massachusetts, which is the alma mater of perjuring Episcopal priest Robert Malm.

The story online is really convoluted. She got the payout before the trial, and seems to still be a priest.

And I something about her just makes me cringe. I would not trust her for diddly.