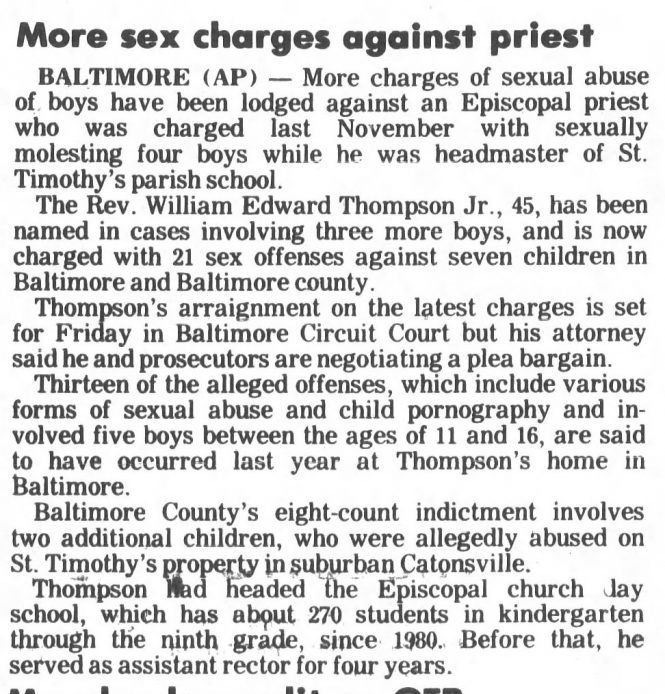 General Seminary graduate the Rev. William Edward Thompson, Jr. was ordained in 1970 in the Episcopal Diocese of Maryland. He was charged in 1988 and 1989 with 21 counts of sexual assault against seven boys aged between 11 and 16 over ten years beginning in 1978 at the now-defunct St. Timothy’s Episcopal Church in Catonsville, Maryland, and at his home in Baltimore. Other charges related to his role as headmaster at the kindergarten to ninth-grade St. Timothy’s School. Thompson was also an assisting priest at Mount Calvary Church, Baltimore, and a daily mass priest at the convent of All Saints Sisters of the Poorin Catonsville. He was additionally charged with production and possession of child pornography of boys in his charge. The Diocese of Maryland suspended him from priestly duties after his November 11, 1988 arrest. Thompson pleaded guilty in 1989 and was sentenced to concurrent terms of ten years incarceration for each count, followed by five years of probation. Thompson was a member of the conservative Anglo-Catholic organizations Society of King Charles the Martyr and Confraternity of the Blessed Sacrament. The Catonsville convent’s sisters also converted en masse to Roman Catholicism in 2009. Mount Calvary also left The Episcopal Church in 2010 to affiliate with the Roman Catholic Church. St. Timothy’s, Catonsville closed in 2013 after the departure of the majority of its remaining members for the Roman Catholic Church.