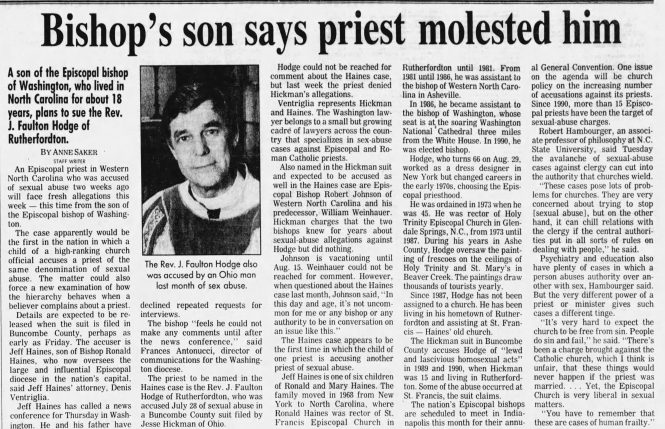 Surrounded by photographs of himself at age eight, Jeffrey Haines told reporters, “Beginning in 1968 when I was eight years old, I was repeatedly sexually abused by a priest named Faulton Hodge in the Diocese of Western North Carolina. This sexual abuse continued through the time I was 20 years old.”
Jeffrey Haines said Faulton Hodge robbed him of his childhood. “I was raised to trust the church and those in authority within it. However, I have been betrayed and the sacred bond between the church and a member of its congregation has been broken,” he said.
In a supporting statement prepared by himself and his wife, Ronald Haines said, “The betrayal by one we thought to be a family friend has been devastating. Jeffrey has struggled mightily to connect severed strands in his life. Our son was made to feel ashamed and guilty before God by an adult whom he admired. That abusive action foisted onto an unsuspecting youth has extracted a great price in terms of spiritual, psychological, physical pain.”
Bishop Robert H. Johnson of the Diocese of Western North Carolina also remarked on the emotional toll exacted by the allegations: “The very filing of these charges and the agony that many will have to endure casts a pall upon much of our church life. I would be less than honest if I denied the distress this causes me, but I believe that the truth will indeed set us free. We must seek that truth, face it, accept it [and] live with it….We will do all we can to make sure that our churches are safe places for all people at all times.” Hodge was an active layman in the community before he entered seminary in 1970, returning to the diocese in 1972 to serve parishes until his retirement in 1987. One of his alleged victims came forward and on July 30 filed his own suit against Hodge.

General Seminary graduate Jay Faulton Hodge was ordained to the priesthood in 1973 and listed himself as non-parochial from 1987 to 1994, when he was removed from the priesthood.