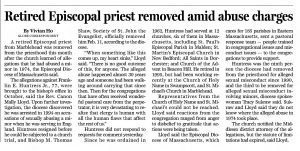 Episcopal priest Franklin E. Huntress, Jr. was a graduate of Berkeley Divinity School who served parishes in Massachusetts, New Hampshire, New York, and several dioceses in the Church of England. He “retired” first in 1994 after he was arrested in the Diocese of Lincoln, England for sexual assault of a child there, and then served until 2002 at the Church of the Advent in Boston, All Saints Church, Ashmont-Dorchester and the Anglo-Catholic Saint Michael’s Conference for Youth in Shrewsbury, Massachusetts (Diocese of Western Massachusetts) before retiring again. He was arrested in October 2010 for charges of the sexual assault of boys under 13 over the course of several years at both Grace Episcopal Church in Manchester, New Hampshire, and St. Stephen’s Episcopal Church in Schuylerville, New York. Because of the statute of limitations, Huntress was charged serially in Massachusetts and New Hampshire courts, but received a 12-month suspended sentence in only one case. Church of England officials did not report his 1994 arrest to The Episcopal Church, allowing Huntress to continue serving in American parishes for an additional eight years. He was deposed from the priesthood by M. Thomas Shaw SSJE, Episcopal Bishop of Massachusettson February 11, 2011. Between 1990 and 2011, Huntress was the ninth person removed from the Episcopal priesthood in the Massachusetts diocese for sexual offenses.

Wasn’t Bruce Wirtz from a few days ago also on staff at the “Saint Michael’s Conference for youth?”

I think so. Predators have this disturbing habit of resurfacing around children.