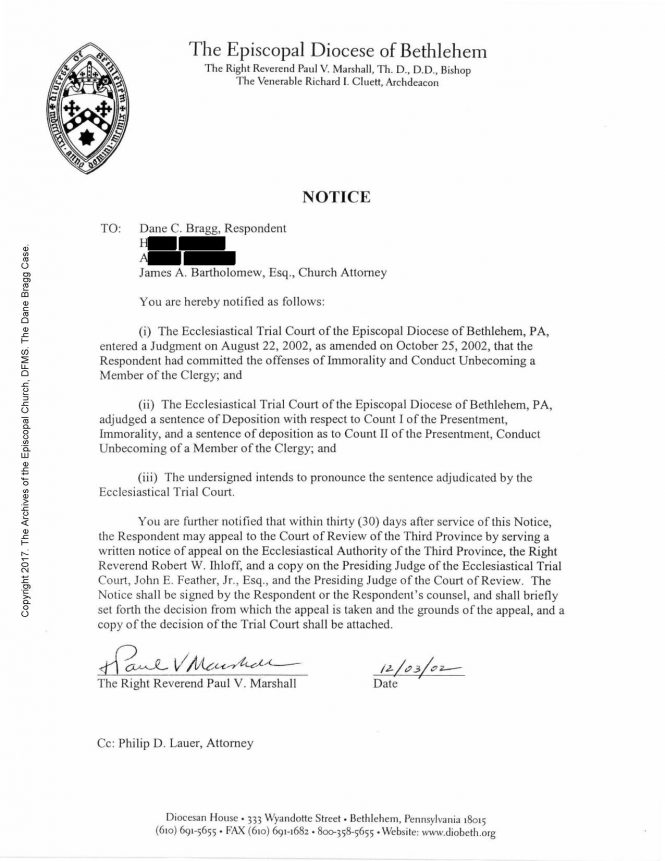 Episcopal Diocese of Bethlehem Youth and Social Ministry Missioner the Rev. Dane C. Bragg was deposed from the priesthood by Bishop Paul V. Marshall on December 12, 2002 following proceedings of a diocesan trial court in August and October 2002 regarding his alleged sexual grooming behavior, groping, manipulation, suggestion of group sex activity, and retaliatory threats against a minor boy and minor girl in his pastoral care. The deposition stemmed from complaints by the minors in October 2001. The Allentown Morning Call newspaper noted that Bragg “set up a sleeping bag next to the boy so that he could stroke the boy’s hair and masturbate while the boy slept.” Bragg was also alleged to have threatened both complainants that he would disrupt their efforts to seek ordination in The Episcopal Church if they shared information regarding his interactions with them. Both are now Episcopal priests. Bragg appealed his removal from the priesthood, which was affirmed by a clerical court outside of the Diocese of Bethlehem in June 2003. In 2005 Bragg and his wife Donna sued the victims, their former youth group members, for defamation. According to the Trinity Episcopal Church, Easton website, as of 2017 Bragg was serving as office manager at the church and as its square dance caller. He was also director of the Trinity Easton Altar Guild beginning in 2020.