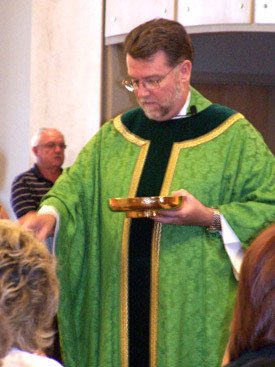 Conservative Anglo-Catholic Episcopal priest Bradley Barber was ordained to the priesthood in 1986. He was a member of the Evangelical and Catholic Mission opposed to the ordination of women to the priesthood. Barber was a priest at Episcopal Church of the Redeemer in Sarasota, Florida until he became a Roman Catholic priest in 1994. Barber was featured in a 2007 Catholic magazine stating that “ordaining women to the priesthood, recognizing same-sex relationships as marriages, and allowing the church to be led by openly gay pastors, those were things that troubled” him and caused him to become a Catholic priest. The married father of four was suspended from the Catholic priesthood in 2009 after police investigated charges that he sexually assaulted a 24 year old man in the rectory. The Catholic Diocese of Little Rock deemed the evidence sufficient to remove his faculties as a priest. A county prosecutor declined to press charges when he found insufficient evidence of physical force. The victim’s attorney said “It’s our position that there was some force. There was some spiritual force, and emotional force and physical force.”