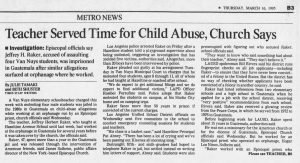 Los Angeles police arrested Jeffrey Herbert Raker of the Los Angeles Unified School District in March 1995 on charges of sexually abusing four minor male students at Hazeltine Elementary School in Van Nuys, California. Police eventually identified seven California boys as victims and broadened their investigation to St. David’s Episcopal Church in North Hollywood. (St. David’s left The Episcopal Church in 2004 and part of the Anglican Church in North America.) Raker had previously spent more than a year in prison in Guatemala after child abuse allegations during his service at an Episcopal Church orphanage in Guatemala. Episcopal Church officials stressed that Raker had not been an official missionary of the Episcopal Church or an employee of the Episcopal Diocese of Guatemala when he worked at the Hogar Los Niños. “An American woman working there reported this guy to the Guatemalan authorities,” according to James Solheim of the Episcopal Church Center. Because Raker was a lay person at the time of his offenses there was no possibility of ecclesiastical discipline. Raker was sentenced to 16 years in California state prison for four counts of forced oral copulation of victims under 14 and one count of forced oral copulation of a victim under 16. In 2008, the Los Angeles County District Attorney filed a petition to civilly commit Raker as a sexually violent predator. In 2013, Raker filed an appeal of his sexual predator designation. This appeal was denied in 2020.