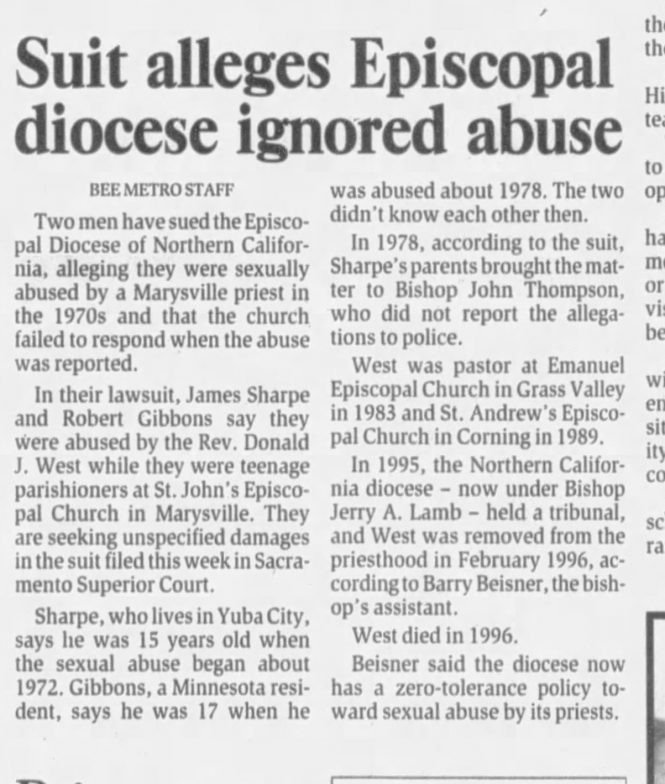 In 2003 two men sued the Episcopal Diocese of Northern California over sexual abuse when they were children at St. John’s Episcopal Church, Marysville, California. One alleged that his parents contacted Episcopal Bishop John Thompson in 1978 about abuse by Episcopal priest Donald J. West, but that Bishop Thompson did not contact police. West then served at Emmanuel Episcopal Church, Grass Valley, California from 1983 to 1989 and St. Andrew’s Episcopal Church in Corning, California, from 1989 to 1995. In February 1996 West was removed from the priesthood by Bishop Jerry A. Lamb because of separate and additional complaints made in 1995. West was ordained in 1955 after graduating from Philadelphia Divinity School and served parishes in Hawaii, South Dakota, Nebraska, Northern California, and Pennsylvania. He was the director of the anti-abortion organization National Right to Life during the 1970s.  West died in 1996.
https://www.poynter.org/reporting-editing/2003/suit-alleges-episcopal-diocese-ignored-abuse/