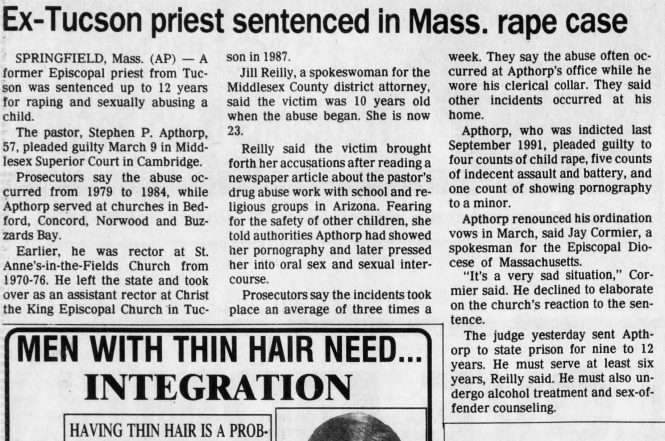 Episcopal priest Stephen P. Apthorp was ordained in 1969 after graduating from Berkeley Divinity School. In 1992 he was sentenced to 9-12 years in prison for raping his step-daughter approximately three times a week between 1979 and 1984, when she was 10 to 15 years old. Apthorp pleaded guilty to four counts of child rape, five counts of indecent assault and battery, and one count of showing pornography to a minor. Apthorp’s stepdaughter testified that the abuse took place in the rectories or parish offices of St. Paul’s Episcopal Church, Bedford, Trinity Episcopal Church, Concord, Grace Episcopal Church, Norwood and St. Peter’s Episcopal Church, Buzzards Bay, all in the Episcopal Diocese of Massachusetts. Apthorp subsequently served as associate rector of Christ the King Episcopal Church in Tucson, Arizona and its director of Alcohol and Substance Abuse Prevention. Apthorp was indicted on the charges in September 1991 and resigned voluntarily from the priesthood in March 1992. Six years of his 9-12 year sentence were mandatory. The Episcopal Clerical Directory identified him as the author of a specialist manual for clergy working in drug and alcohol counseling.