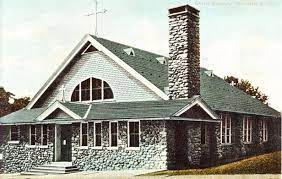 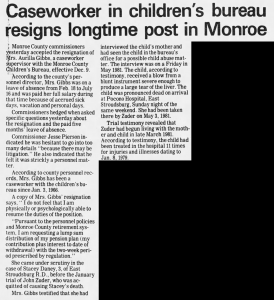 Episcopal lay organist Aurilla Gilman Planchock Gibbs served churches in the Episcopal Diocese of Bethlehem as a choir director, organist, and music teacher from 1970 to 2002. Gibbs was a case worker for the Children’s Bureau of Monroe County from 1960 to 1975, when she was dismissed following internal grievances on the handling of child abuse inquiries and a murder. Gibbs testified for the defense of 17 year old murderer Richard Calvin Klinger in 1972 after overseeing his foster care placement from the age of seven in what she admitted were substandard conditions. Gibbs was re-hired as a case worker in 1976 and stood trial in 1981 for illegally obtaining a confession by a father regarding incest resulting in pregnancy with his 15 year old daughter. Gibbs resigned in 1982 after she was implicated for failing to act in the beating death of an infant under the supervision of the Children’s Bureau. Gibbs filed a report indicating that there were no parenting issues on the day before the one year old child was dead on arrival at an East Stroudsburg hospital from blunt force trauma causing internal bleeding and organ damage. Gibbs subsequently taught piano lessons at Christ Episcopal Church, Stroudsburg, was president of Episcopal Church Women, led the choir, and assisted Kenneth Bernard Schade of the Singing Boys of Pennsylvania choir on its local concert tours. Gibbs introduced her grandson Michael Goucher to Schade at the age of six, and Schade adopted Goucher as an organ student at Christ Episcopal Church. Goucher physically assaulted another minor parishioner during worship after a second child complained to clergy about Schade’s sexual abuse, with Gibbs screaming during a service that Schade “just loves all you boys.” Episcopal priests Joseph De Acetis and Charles L. Rice refused to intervene in the ongoing arguments between two Schade victims. Gibbs continued to defend and support Schade following major local newspaper complaints about his abuse of children from 1992 until her death in 2006. She died before his 2014 conviction for underage sexual assault and 1,101 counts of child pornography possession. Goucher became organist at the neighboring Zion United Church of Christand was stabbed to death in February 2009 in a sex crime covered in national news.

Another fine Episcopal leader from Bethlehem I see…