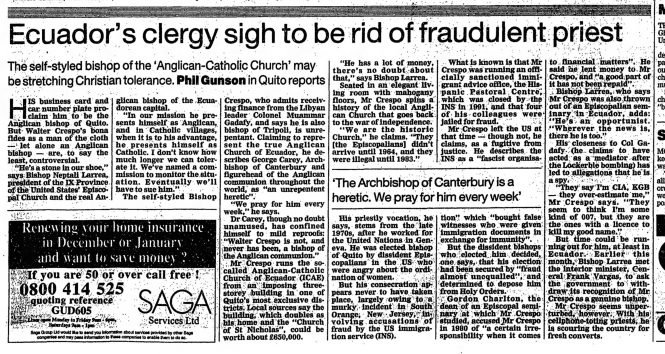 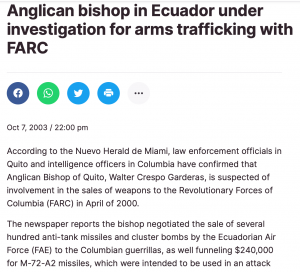 Walter Roberto Crespo-Guarderas entered the Episcopal Seminary of the Southwest in Austin, Texas, where he was described as “an exceedingly intelligent and active student.” His studies were terminated by Dean Gordon Charlton because of “much evidence of irresponsibility or perhaps instability of character.” Crespo then affiliated with several Continuing Anglican denominations, including the Anglican Province of Christ the King, the Anglican Catholic Church, the Holy Catholic Church-Anglican Rite, and Anthony Clavier’s American Episcopal Church (which is confusingly named similarly to The Episcopal Church headquartered in New York City). Crespo was removed from the American Episcopal Church by Archbishop Tony Clavier in 1991 after Crespo’s implication in a federal investigation into falsified amnesty applications for illegal aliens filed by his Anglican Hispanic Pastoral Center in New Jersey. Crespo then created rival congregations in the US Episcopal Church’s Province 9 dioceses of Ecuador Central and Ecuador Litoral, claiming himself to be the Anglican Bishop of Quito. In 1996, Crespo claimed that his confusingly-named church was funded by Muammar Gadafy, who had appointed him Bishop of Tripoli. The BBC reported in 2001 that Crespo had been detained by Ecuadorian officials on arms smuggling charges over confiscated weapons destined for Colombian rebels. Crespo traveled to Zimbabwe in 2010 to invite Robert Mugabe to receive an honorary doctoral degree from his Anglican church in Ecuador. Crespo’s Anglican Foundation, Inc. was incorporated in Menifee, California on January 26, 2005 and suspended by the California Secretary of State in 2007. It received a California Franchise Tax Board Suspension on November 3, 2014.