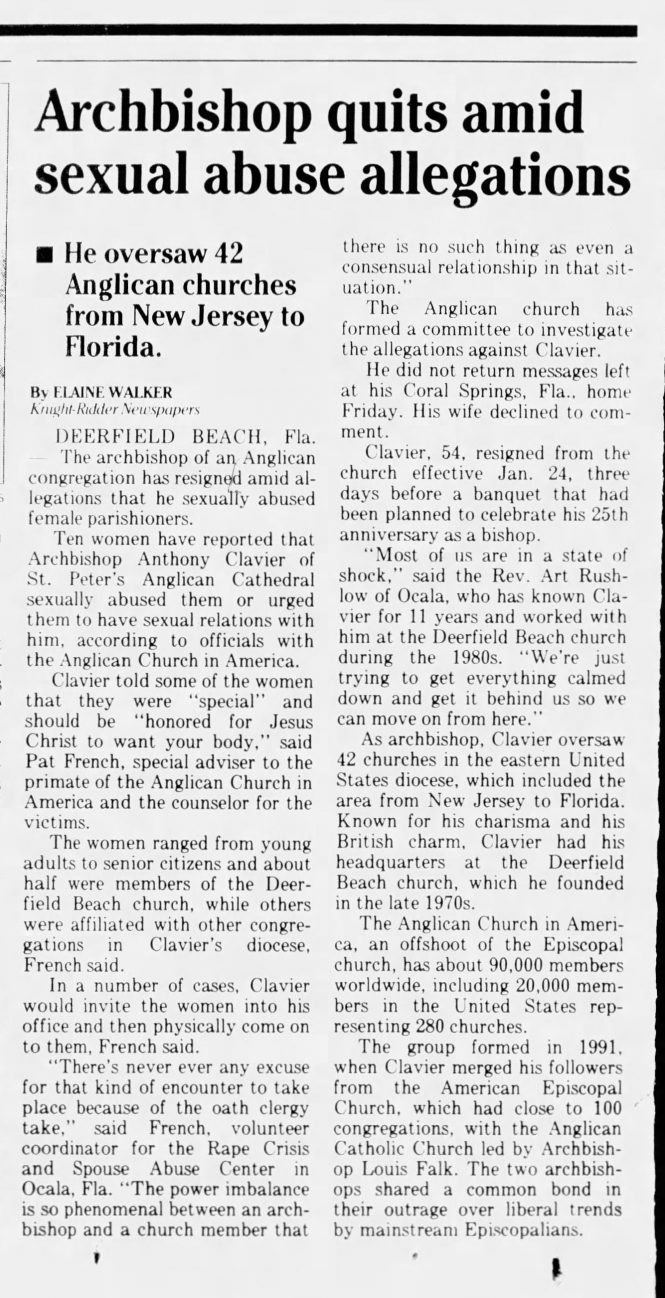 Anthony (“Tony”) Clavier has been a priest or bishop in the Catholic Episcopal Church, Free Protestant Episcopal Church, English Episcopal Church, Old Roman Catholic Church, Catholic Apostolic Church, Anglican Orthodox Church, American Episcopal Church (named confusingly like The Episcopal Church), and Anglican Church in America. Florida newspaper coverage in the 1980s questioned Clavier’s adoption of former Episcopal priests including convicted child rapist Sterling Rayburn and multiple bigamist Frank Pannitti into his churches. Clavier also incardinated Walter Crespo, later distinguished for his associations with INS fraud, funding from Muammar Gaddafi, a relationship with African dictator Robert Mugabe, and South American arms trafficking. Clavier resigned as Archbishop of the Anglican Church in America in 1995 after ten adult women in Florida accused him of sexual assault. He was deposed in 1995 by his own House of Bishops. Clavier was then received into The Episcopal Church as a priest on November 16, 1999 by Episcopal Bishop of Arkansas Larry Maze (Episcopal Clerical Directory), and has appeared as a bishop in the Episcopal Diocese of Springfield and elsewhere since that time (YouTube video of diocesan events). Clavier represented The Episcopal Church as a bishop at the 2019 National Workshop on Christian Unity opening worship in St. Louis. He is editor of The Anglican Digest magazine and a contributor to The Living Church.
https://afmclavier.com
https://en.wikipedia.org/wiki/Tony_Clavier