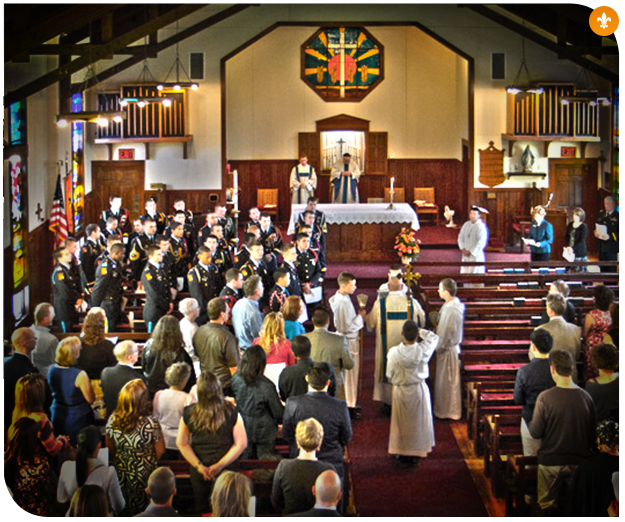 National Association of Episcopal Schools member St. John’s Military School was founded in 1887 in Salina, Kansas by Elisha Smith Thomas, first Episcopal Bishop of Kansas. A wide range of abuse claims were filed against St. John’s in a federal lawsuit in March 2012. An amended complaint was filed by six sets of parents on behalf of cadets from California, Florida, Tennessee, Colorado, Texas and Illinois. The lawsuit was settled with undisclosed terms in March 2014. According to court records, as of June 2012 St. John’s had settled fourteen previous abuse-related lawsuits filed since 2006. A March 2013 report found 339 complaints of beatings, hazing, harassment, and abuse over the five previous years, including minor boys being branded and urinated upon, undergoing sexual attacks, hazing, and mental abuse. In December 2018, St. John’s was ordered by an arbitrator to pay $369,175 to the family of a student who was 11 years old in 2014 when he was raped by another student; the arbitrator found that in addition to inadequate and inappropriate management of students, the school had relaxed admission standards in response to declining enrollment. The school’s long-time chaplain and history teacher beginning in 1990 was Nashotah House graduate and conservative SSC (Society of the Holy Cross) member James R. Cox. Episcopal Bishop Michael P. Milliken remained board trustee until his 2018 retirement. The Episcopal school closed on May 11, 2019 after its remaining board of trustees amended incorporation documents on July 27, 2018 to remove the Episcopal Diocese of Western Kansas as the recipient of its assets.

So who got the money if the diocese didn’t?

Great question. Anyone know the answer?