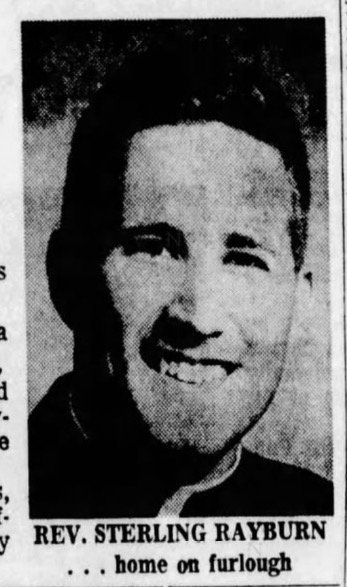 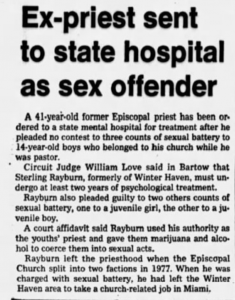 Nashotah House graduate and Episcopal priest Sterling Rayburn was ordained to the priesthood in December 1964 for the Episcopal Diocese of South Florida. He was priest at St. James, Ormond Beach, Florida from 1964 to 1966, priest in charge of a parish in Puerto Rico from 1966 to 1971, and at St. Barnabas, Deland, Florida (1971-1973), and St. Paul’s, Winter Haven, Florida (1973-1975) and rector of the Church of the Holy Cross, Winter Haven (1975 to 1977). In December of 1977 Rayburn and others founded a church called the Anglican Diocese of the Southeastern United States and resigned his orders in the Episcopal Church over the ordination of women to the priesthood. This church was initially hosted by the Polish National Catholic Church in St. Petersburg, Florida. He later affiliated with the Anglican Catholic Church, the Diocese of the Holy Trinity, the “Anglican Church of North America,” and the “American Episcopal Church” of Bishop Anthony Clavier. Rayburn was arrested in Miami 1979 and charged with two counts of battery of minors (one boy and one girl), one count of forced copulation against an 11 year old boy, other counts of forced oral sex against three 14 year old boys, and five counts of providing alcohol and marijuana to minors. He was ordered to a Florida State mental hospital for two years of psychological treatment and ten years of supervised probation. Rayburn subsequently became an Orthodox monk and priest using the names Isaac Melton, Brother Isaac, Father Andrew, Isaac Rayburn, Sterling Melton Peter Rayburn, Father Isaac, and Father Peter. An Orthodox Christian internet group dedicated to sexual abuse survivors discovered Rayburn’s criminal record in 2004. He was beaten by a construction worker in Santa Fe in 2005 and continues to offer spiritual retreats at Orthodox monasteries in Georgia and New Mexico.

Most people change their first name when they become Orthodox and IIRC also when they become monks or priests, but it seems like the many different identities in this case are a case of a monk on the run.

Rayburn was never an Orthodox priest. He is called “Father” because he is a monk and spiritual guide.

“Father John Bethancourt, the priest at Holy Trinity Antiochan Orthodox Church, told his parishioners about Father Andrew’s past in January after the protest by Pokrov. Bethancourt, who hears Father Andrew’s confessions, is convinced Father Andrew is not a danger to children. “He is sober and chaste, both in thought and action,” Bethancourt says. “You can be sure that Father Andrew prays with tears for the people he has hurt, weeping prostrate on the ground.”

Well, then Orthodoxy clearly makes you all better of raping 11 year olds.