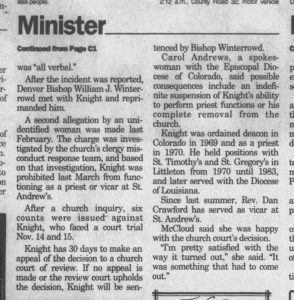 Episcopal seminary Dean Jack C. Knight was ordained to the priesthood in 1970. Knight graduated from Nashotah House and was its dean from 1985 to 1992. Police documents in 1993 and 1994 from an investigation into child sexual abuse at the seminary during his deanship recorded a prevalent culture of faculty-student relationships, homosexual and heterosexual student relationships, extensive circulation of pornography among seminarians, and use of alcohol and drugs supplied by adults to minors. Knight dismissed the criminal charges that led to three seminarians’ prison sentences by saying that no offenses could have taken place because children were not allowed in seminary’ dormitories. In 1994 Dean Knight admitted that he was aware of complaints about the sexually inappropriate behavior of Hershel Eugene Maxey at the seminary, but allowed him to proceed to ordination in the Episcopal Diocese of Albany in 1989. Maxey was sentenced to 20 years for second-degree sexual assault of five children at Nashotah House and in his parishes both before and after ordination.