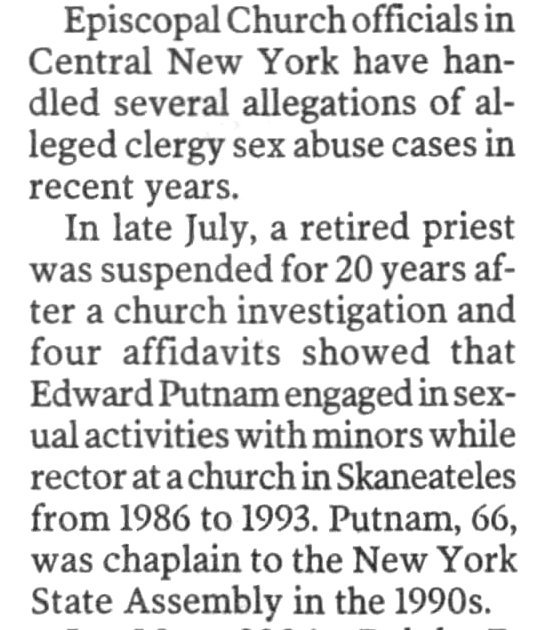 Episcopal priest and cathedral dean J. Edward Putnam was suspended from the priesthood for 20 years in 2007 after admitting to sexually abusing four adolescent male parishioners while he was rector of St. James Episcopal Church, Skaneateles, New York between 1986 and 1993. Putnam became Dean of the Episcopal Cathedral of All Saints, Albany in 1993. A graduate of Berkeley Divinity School, Putnam was ordained in 1970 and served parishes in New York, Massachusetts, Maine, and Oklahoma.

The Episcopal Diocese of Rochester and St. Mark’s view each and every allegation of sexual misconduct with the utmost seriousness. Allegations involving children and youth are especially painful and deserving of the greatest sensitivity. We believe it is a disservice to all parties to comment further on this matter.

Despite the 20-year suspension from the priesthood in 2007, Putnam continued to represent himself as a priest until his death in 2016 including to the Yale Alumni Magazine .