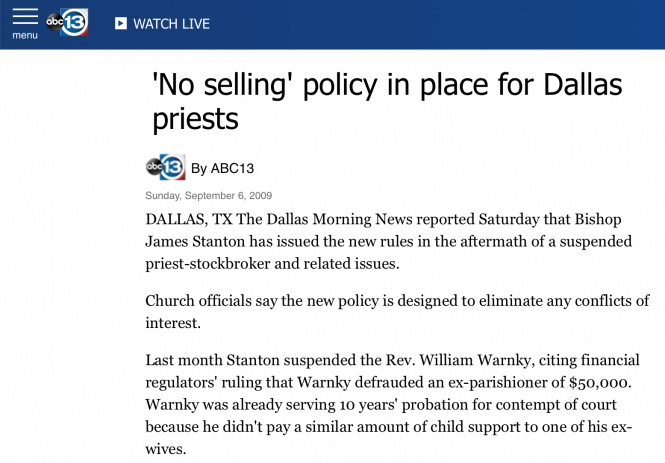 In 2019 Financial Industry Regulatory Authority (FINRA) suspended investment banker Clayton Wertz of Dallas-based First Canterbury Securities for creating “false brokerage account statements to help a client secure and maintain a multi-million dollar bank loan and line of credit.” First Canterbury Securities was founded on September 1, 1982 by two conservative Anglo-Catholic priests of the Episcopal Diocese of Dallas. It was the subject of regulatory actions and customer disputes with FINRA in 1998, 2006, 2008, 2011, and 2018. The Securities and Exchange Commission terminated First Canterbury on April 27, 2021. In 2009 the Episcopal Diocese of Dallas suspended the two founding priests, the Rev. Raymond E. Jennison Jr. and the Rev. William Warnky, for bi-vocational activities that led to fraud and securities charges by their own parishioners. Members of at least three Dallas congregations entrusted  investments to the priests, who made unauthorized trades resulting in losses to their financial clients. The Financial Industry Regulatory Authority suspended Warnky in August 2009. Warnky and Jennison sued each other for defamation and inappropriate supervision. Dallas Episcopal Bishop Paul Lambert said he believed Jennison had financial relationships with “maybe three congregations at the most. As far as individuals, there probably weren’t more than 15 or so. We really don’t know.” One parishioner of the Church of the Good Samaritan told regulators that Warnky made unauthorized trades on his behalf that cost him more than $100,000 between 2004 and 2007. Another parishioner charged that when she sought to close a First Canterbury account managed by Warnky, Jennison falsely claimed that there would be “serious tax consequences” and yelled at her on church grounds. Bishop Stanton instituted a conflict of interest policy for clergy working in the Dallas financial industry.
Jennison was the priest at St. David’s Episcopal Church in Garland, Texas. He graduated from Nashotah House and was ordained to the priesthood in 1975.
Warnky was the priest at Good Samaritan Episcopal Church in East Dallas (White Rock Lake). He graduated from Nashotah House and was ordained to the priesthood in 1976. He voluntarily renounced his priesthood in The Episcopal Church by the end of 2009. He served a ten-year suspension from the financial industry for failing to pay child support to one of his ex wives before the fraud charges at First Canterbury.
Conservative Bishop James Stanton suspended both priests. Jennison “agreed to accept a 90-day leave of absence.”
https://www.episcopalarchives.org/cgi-bin/ENS/ENSpress_release.pl?pr_number=091109-04
https://www.dallasnews.com/news/watchdog/2009/08/28/another-dallas-episcopal-priest-suspended/
https://abc13.com/archive/6990329/
https://www.sonnlaw.com/broker-investigations/clayton-wertz-formerly-of-first-canterbury-securities-barred-from-finra-for-creating-false/