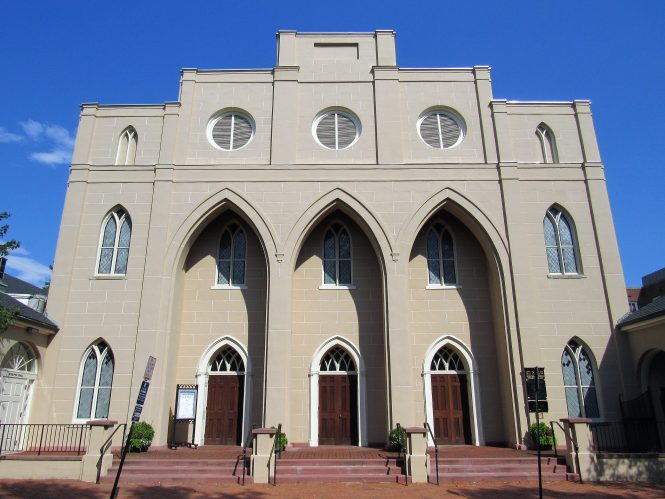 The Episcopal Survivors Network, which shares several team members with this publication, today sent out a press release on the connection between St. Paul’s Alexandria and so-called enhanced interrogation techniques. The latter, considered torture by many, were deployed as part of the so-called war on terror. The release omitted mention of sexual abuse of prisoners, which may or may not have been authorized under the enhanced interrogation program.

Following is the release:

ALEXANDRIA, Va. — The Episcopal Survivors Network (ESN) condemned the Episcopal Church’s complicity in the torture of detainees in America’s so-called war on terror.

In an article first reported on Anglican Watch, Episcopalians David and Anne Ayres, members of the prominent St. Paul’s parish in Alexandria VA, were linked to the government’s “enhanced interrogation” program, considered torture by human rights groups and the Episcopal Church.

Government filings show that David Ayres served as CFO of the organization that developed torture techniques and signed documents in that capacity.

Indeed, when protests began outside the company’s west coast offices, Ayres assisted the group in relocating to an address near his home in Alexandria, Va.

When contacted by reporters, the Ayres, the church vestry and its clergy refused comment. The Rev. Oran Warder, rector of the parish, was on sabbatical at the time of the request, but still has not commented on the allegations.

The church is believed to receive extensive funding from the Ayres, and Anne Ayres recently served as senior warden of the parish.

“We demand that the church condemn, without reservation or equivocation, torture in all forms,” said ESN spokesperson Eric Bonetti.

“We also believe that the Book of Common Prayer’s provision to repel unrepentant sinners from communion is appropriate in this situation. And while the diocese still has not complied with the requirements of General Convention 79 to update its safe church policies, adding a provision to deal with sexual assault in situations like this should be included. ‘I wasn’t directly involved,’ doesn’t cut it.

“Lastly, it it is laughable for St. Paul’s to proclaim its commitment to social justice when it cashes in on torture. This is the modern-day equivalent of selling out for 30 pieces of silver, Bonetti concluded.