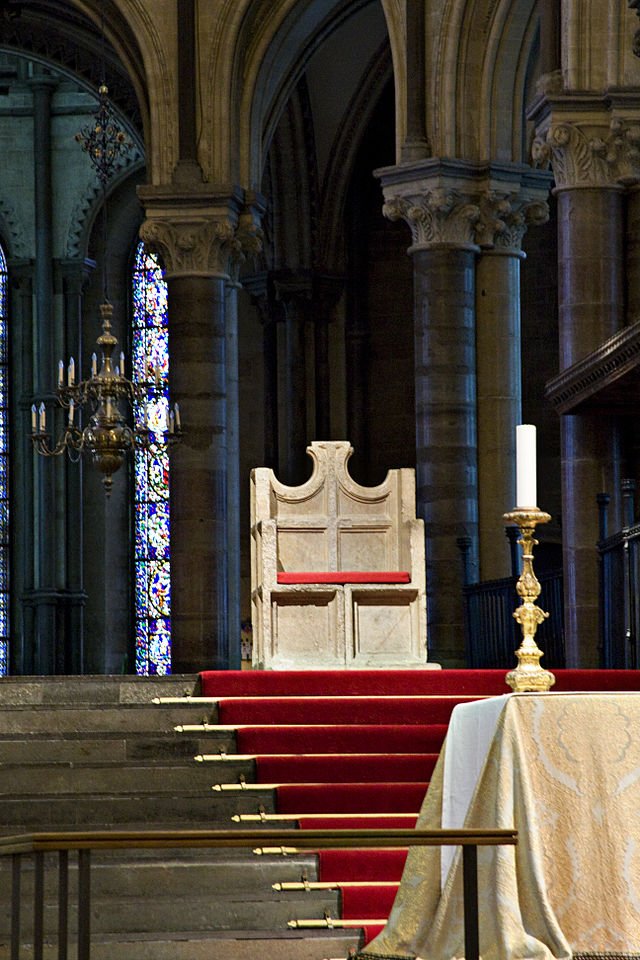 True to form, the recent Lambeth Conference again brought to the fore conflicts over same-sex marriage and human sexuality. The fault lines were as expected, with the Global South Fellowship of Anglican Churches (GSFA), pressing hard to force other provinces to ban same-sex marriage, while progressive provinces artfully pushed for an agreement to disagree. And the result was pretty lame, with the usual babble about communion amidst differences and not much else to show for all the effort, even as the Archbishop of Canterbury (ABC), Justin Welby, weasel-worded his position on same-sex marriage.

So how did the Anglican Communion get its start?

The answer begins with the religious revivals of the 18th century in the Church of ENgland. By the 19th century, both Anglo-Catholics and Evangelicals, operating under the flag of the British Empire, sought to bring Christianity to Africa, India, China, and other far-away countries. Often, there was a sense of competition, as Lutherans, Catholics and others sought to bring “light to the darkness.”

Over time, some efforts faltered. For instance, today there is a tiny Anglican presence in Russia today outside the British Embassy. Elsewhere, as in India, Anglicanism has struggled to regroup following independence from Britain.

But in Africa, many countries still have strong ties to their colonial past. In these areas, Anglicanism remains strong, particularly in places like Kenya, where the church advocated for free speech and fair elections. Similarly, the South African church’s role in opposing apartheid and working for racial reconciliation resulted in a relatively large number of Anglicans in that area.

Many of these Anglican provinces also reflect both conservative cultural norms and the influence of the Evangelical background of those early missionaries. As a result, the Anglican Church in Uganda proclaims itself as “a Jesus-loving, Bible-believing, Spirit-filled Anglican Church engaged in the mission of Jesus Christ in today’s world,” even as it actively opposes LGBTQ+ equality.

Indeed, as head of the Church of England, Queen Elizabeth has been careful to maintain balance between liberals and conservatives, having appointed John Sentamu, a vigorous opponent of same-sex marriage, Archbishop of the ancient seat of York, the second most ancient seat in the Church of England. Thus, while no doubt the crown tries to maintain an ABC who will have a positive impact on the communion, the only difference between this archbishop and the countless other primates in the communion is tradition, nothing more.

In all of this, there’s an important trend afoot, which is that the progressive Anglican provinces, including the U.S., Canada, and the Scottish Episcopal Church, are collapsing. And things are not much better in the Church of England, where by 2018 only 12 percent of the population identifies as members. Things get worse still when one correlates age with religious affiliation, where only 1 percent of persons age 18-24 identify as members of the Church of England. Nor is the secularization of society limited to the young; among those over age 75, by far the most religious cohort, only 1 in 3 identify as members. Only 11 percent of the population say they trust churches and other religious organizations. And more than half of the UK population reports no religious affiliation.

Nor are things any better in the U.S. As Anglican Watch has reported, not only does the data indicate that the Episcopal Church is dying, but it is now dying more rapidly due to COVID.

The reasons for this collapse are largely beyond the scope of this article, but Anglican Watch believes they can best be summarized as the church has failed to keep pace with the times. Indeed, as we have often said, corporate America — often far from being a bastion of peace, goodwill towards others — consistently exceeds the ethical standards of the Episcopal Church and its sisters. Similarly, far too many churches still follow a “build it and they will come” approach, at a time when church attendance simply isn’t normative, and many other activities jostle for attention.

Understanding Where We Are

So where does this leave us?

First, we still have but a dim understanding of Anglicanism’s roots in colonialism. While it is shockingly obvious how white most Episcopal Churches are, other indicia are less immediately obvious. For instance, in my childhood parish, there is a stained glass window depicting the Epiphany. While I love the beauty of the artwork, the three wise men are white, while the baby Jesus is not only white, but sports a shockingly full head of blond hair. Other church art carries similar connotations.

Similarly, having visited Anglican churches worldwide, a surprising number reflect their colonial heritage, ranging from Gothic granite edifices in the Middle East to half-timbered churches straight out of an English village sitting in towns in Africa. And some, like the Cathedral in Brussels, use the English prayer book, replete with prayers for Queen Elizabeth.

Second, much like the Roman church, the epicenter of growth within the Anglican Communion typically is in Africa. The Anglican Church of Uganda alone, for example, is roughly five times the size of the dying American church. In fact, Nigerian and Ugandans account for almost 1/3 of world Anglicans.

Here’s a breakdown of demographics as supplied by the Anglican Communion: 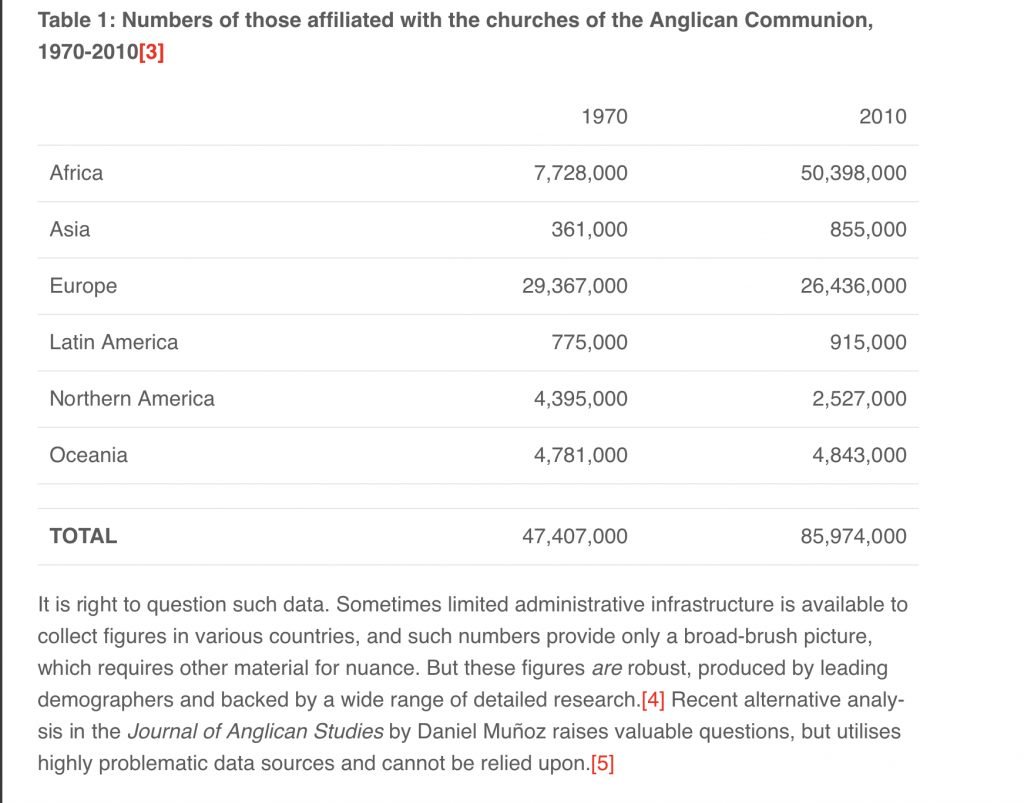 Demographics in the Anglican Communion

Meanwhile, observers note that the evangelical fervor of the north African churches is what is causing profound growth in Nigeria, Sudan, Congo, Uganda, and Kenya. In other words, it is not the work of modern-day missionaries, nor the transfer of resources from “white savior” churches, but the work of native Anglicans.

That speaks to another important issue within Anglicanism: Many African Anglicans are passionate about their faith. But when they move to the UK or the US, they typically find parishes cold, devoid of faith, and lacking in passion. Indeed, a high percentage wind up moving to evangelical or Pentecostal churches, which they find to be more vibrant and welcoming. That speaks volumes, yet it’s a message that’s largely ignored. (Indeed, I remember one church, where I was a member for several years, and was repeatedly asked “how did you find us? The irony of the question was lost on the asker.)

Of course, the burgeoning size of the Anglican Church in Africa does not mean that African Anglicans can, or should, dictate to other provinces within the communion. But there is much to be learned from these provinces, and we need to be careful of looking down on them, or dismissing them out of hand.

Looking to the future, the Global North in Anglicanism is in a dire way. Absent major reform, the Episcopal, Church of Canada, Church of England and Episcopal Church of Scotland all will be gone as we know them within 20 years.

Meanwhile, there’s no real reason for African Anglicans to pay attention to the Archbishop of Canterbury. Indeed, if he or she is to be the first among equals, it logically follows that some of the other equals should have the opportunity to be the symbolic head of Anglicanism. (Sorry folks, being enthroned by the senior primate in the Communion doesn’t cut it.)

As a result, if thing stay their present course, we will face a situation in which a tiny Episcopal church comprised of Trinity Wall Street and a handful of others — will collaborate with a vestigial Anglican Church of Canada and an equally moribund Church of England to pretend they are equal players at a table in which they are vastly outnumbered in every way. Even now, no one really cares what 1.6 million Episcopalians think, and that’s all the more true if you are an African Anglican.

The alternative is for the Episcopal Church and its sisters to learn from the African provinces and move to revival. This includes a passion for faith, meaningful outreach on a consistent basis, and a focus on real ethics. That includes cleaning out the rot and corruption within the upper echelons of the church and ending its focus on the long-gone days as the quasi-state church of wealthy white folks.

Nor is that limited to the Episcopal Church.

So, the Episcopal Church faces a decision of life or death. As things stand, it has decided to die. But if it changes its mind and decides to live, it will need to come to terms with the fact that the Anglican Communion can no longer be a colonial structure, but also that there is much that the progressive provinces can learn from the Africans,