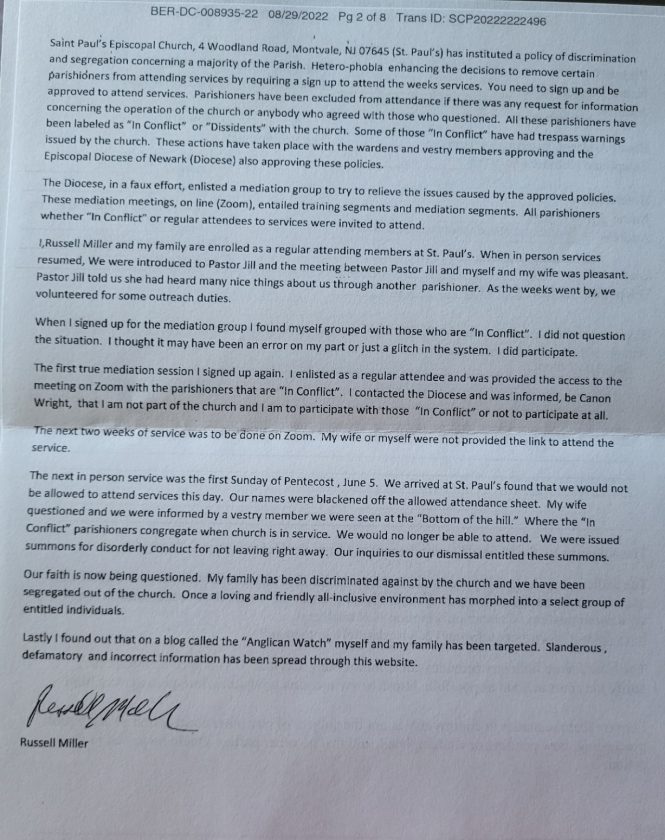 Better to remain silent and be thought a fool than to speak and to remove all doubt. — Unknown

Even a fool is thought wise if he keeps silent, and discerning if he holds his tongue. — Proverbs 17:28 NIV

One of the things about publishing a discernment blog like Anglican Watch is that humor is rarely part of things.

But every once in a while something comes along that makes up for the humor deficit, and then some. And this one had us falling out of our seats with laughter.

The suit alleges a highly innovative claim, “hetero-phobia,” and was docketed as a contract claim. Russell demands $10,000,000 in damages (upper right corner of pleading), although the suit was actually filed for $20,000.

The complaint does not appear to implicate any actionable claims, but instead sets forth a litany of inchoate grievances best described as “clueless.”

In fact, the complaint is so badly prepared we’re not sure we can parse the various issues, so we’ll let the PDF below speak for itself.

Some of the recitations appear to be an effort to justify Miller’s presence on church property on the day when he was charged with defiant trespass:

The next in person service was the first Sunday of Pentecost, June 5. We arrived at St. Paul’s found that we would not be allowed to attend services this day. Our names were blackened off the allowed attendance sheet. My wife questioned and we were informed by a vestry member we were seen at the “Bottom of the hill.” Where the “In Conflict” parishioners congregate when church is in service. We would no longer be able to attend. We were issued summons for disorderly conduct for not leaving right away. Our inquiries to our dismissal entitled these summons.

As if this weren’t sufficiently cringeworthy, Miller goes on:

Our faith is now being questioned. My family has been discriminated against by the church and we have been segregated out of the church. Once a loving and friendly all-inclusive environment has morphed into a select group of entitled individuals.

But wait, there’s more. Just in case the justices of the Supreme Court aren’t already prepared to call the court into emergency session to deal with this egregious breach of contract, the complaint concludes with a rousing call to action:

Lastly I found out that on a blog called the “Anglican Watch” myself and my family has been targeted. Slanderous defamatory and incorrect information has been spread through this website.

Seriously, you can’t make this stuff up. Or maybe you can if you are Miller, and choose to ignore the fact that “slander” involves a spoken statement. A talking blog. Who knew?

On a more serious note, Miller’s claims of “hetero-phobia” speaks compellingly to the real motives of the dissidents, which appear to be nothing more than thinly concealed homophobia, with a big dollop of general ill-well tossed in, and a oversized dash of cluelessness stirred throughout.

Moreover, there is real risk to Miller in all of this. Not only may he face sanctions for filing a frivolous suit, but the pleading itself indicates a lack of remorse for his alleged defiant trespass. In other words, even if the judge is kind and doesn’t impose sanctions against Miller, Miller’s complaint may have just made his legal situation worse when it comes to the criminal charges pending against him. And we doubt the judge will look kindly on the inaccurate statement that there is no related litigation—by Miller’s own statement, this is related to the criminal charges now pending against him.

Then there is the issue of the non-justiciability of church cases. As a First Amendment matter, courts cannot and will not intervene in internal church decisions. And courts give churches tremendous deference, even in cases of arguable torts. So even if this pleading articulated a cause of action — and it doesn’t — this one wouldn’t stand a chance.

In the meantime, we can only say this: We are trying very hard to honor the baptismal covenant. We really are. But this pleading is so damned dumb that it’s hard not to be snarky.

Finally, we have one request: Isn’t there someone who can provide adult supervision to this chucklehead? Wife Louise? Child? Friend? Surely someone in his orbit has sufficient common sense and influence to discourage more silliness on his part.