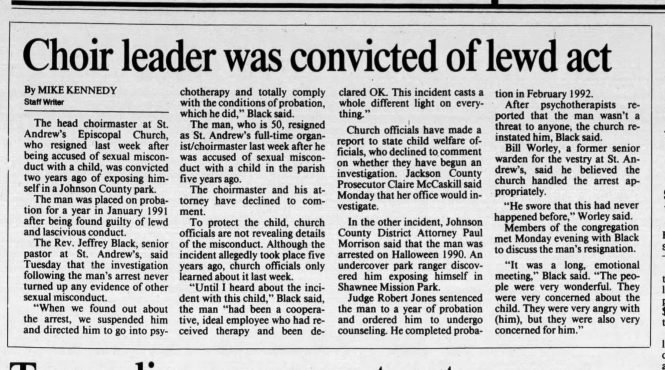 An unnamed St. Andrew’s Episcopal Church, Kansas City organist and choirmaster resigned from his positions in May 1993 after being accused of sexual misconduct with a minor boy in the parish. The man had been convicted of exposing himself in a public park in 1991 and removed from the choirmaster job, but completed the conditions of his probation and was reinstated as organist. “We were told he was OK” said St. Andrew’s rector Episcopal priest Jeffrey Black. The name of the organist was not revealed by the press “in order to protect the child.”

Somehow I doubt the wellbeing of this child is the least of the concern of this “church”….

Yeah. That sort of approach seems endemic in TEC. And folks have just spent several weeks in Lent—anyone see any signs of actual repentance anywhere? In 50+ years, I’m still waiting. 😉

Seriously, how is refusing to name the person who was arrested and removed from his position a way of protecting the child victim?

I agree, buddy. Far too often, it’s all about the institution.