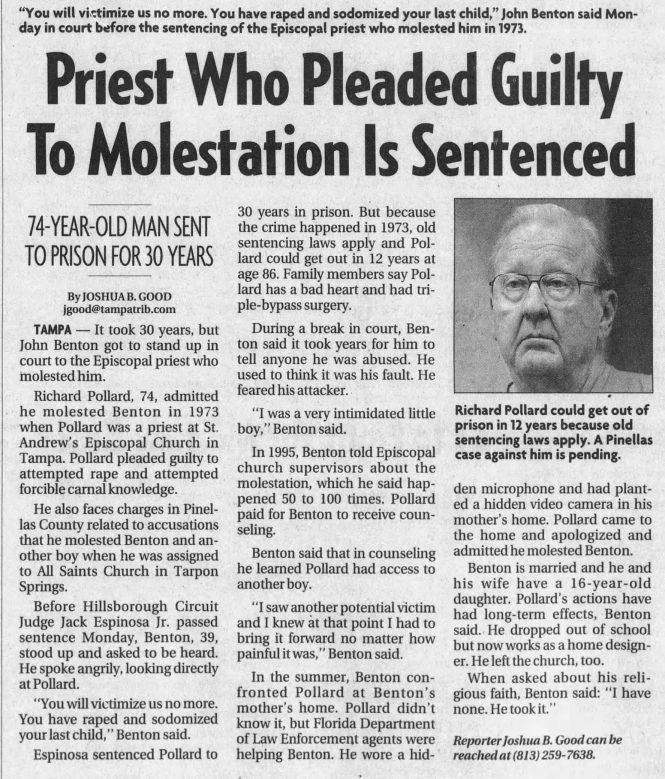 The Rev. Richard Arthur Pollard, a graduate of Philadelphia Divinity School, was ordained to the priesthood in 1954. Immediately after ordination, he served three parishes in New York State. From 1969 to 1974, he was the vicar at St. Elizabeth’s Episcopal Church in Zephyrhills, Florida. From 1969 to 1974, he served at St. Andrew’s Episcopal Church in Tampa, Florida. He then moved to All Saints Episcopal Church in Tarpon Springs, where he served until his retirement in 1992. He was president of the Standing Committee of the Diocese of Southwest Florida from 1980 to 1984. In 1995, Episcopal Diocese of Southwest Florida authorities allowed Pollard to settle with one victim by paying for his psychological expenses following accusations of child sexual assault at his parish in Tampa. Further allegations surfaced regarding his parish in Tarpon Springs. Eventually, five men accused Pollard of underage sexual assault, leading to his August 2002 charges with nine counts of sexual battery involving parishioners as young as 6. In March 2003, he was sentenced to 30 years in prison. He was deposed from the priesthood in June 2002 after renouncing his orders, but admitted no wrongdoing. He remained in the online Episcopal Clerical Directory until 2005.
https://www.yourlawyer.com/lawsuits/ex-priest-charge-sex-abuse/