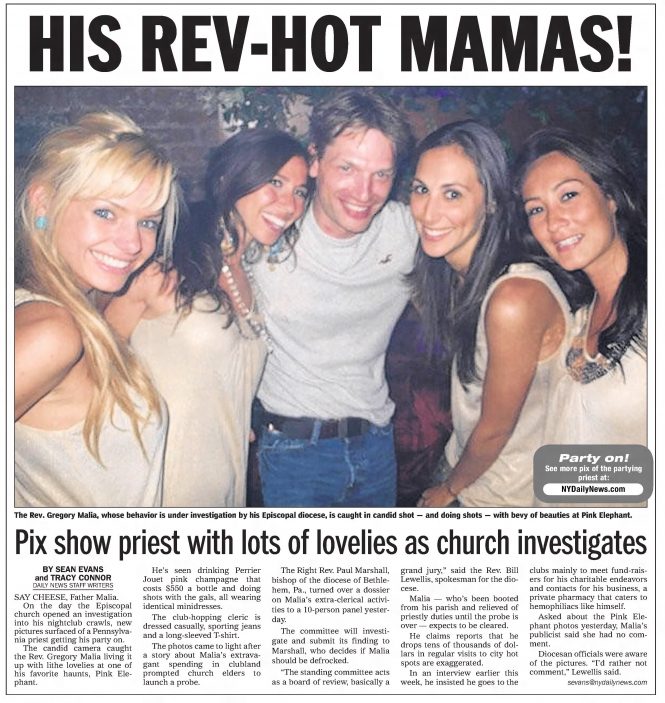 The Rev. Gregory Malia of St. James’s Episcopal Church in Dundaff in the Episcopal Diocese of Bethlehem, was removed from the priesthood by Bishop Paul V. Marshall in February 2010 following an incident in which Malia drew a .38mm pistol and threatened his daughter’s boyfriend at a bar in July 2009. He had previously been suspended from the priesthood following New York Daily News coverage of the priest’s activities at New York City nightclubs. Malia was subsequently sued by his daughter for assault and battery. He pleaded guilty to five counts of reckless endangerment and two counts of simple assault stemming from an incident in which the priest’s girlfriend broke his daughter’s nose. Malia remained in the online Episcopal Clerical Directory until 2013.
Conservative commentator David Virtue wrote—

Fr. Gregory Malia was defrocked after the “New York Daily News” described him as “a big spending, champagne swilling, club-hopping priest from the coal fields of Pennsylvania” who frequents trendy Manhattan clubs “in the wee hours and spends thousands on top shelf liquors, doling out five-figure tips like silver dollars.” Exit Malia.

I am beginning to see what Ye is saying about the Episcopal clergy in Bethlehem, Pa…

I’m so sorry, Toucan. The church should be the safest, most loving place around. As the late Barbara Harris used to say, “Nobody can hate like Christians.”

Looks like his church was just a summer chapel so maybe that’s why he had the side business https://diobeth.org/st-jameses/

For me, it is really more of his personal conduct that bothers. He seems like the kind of person who is “nice” in one instant and then angry in the next.

It also seems like he will also take it out on people who have no part in it – that he will make others miserable because of his personal issues.