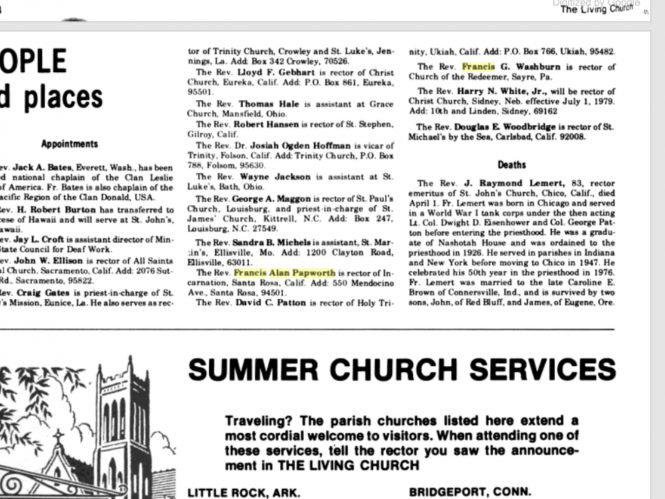 The Episcopal Diocese of San Diego and All Saints Episcopal Church in Chula Vista CA have been sued over allegations of sexual abuse by the late Francis Alan Papworth. Papworth previously served as rector of the parish and allegedly abused the plaintiff, then a teenager, from 1974-1975.

Papworth was arrested in 1986 and served four years in prison for molesting boys. He was deposed in 1988.

According to testimony in a prior civil suit, Papworth’s wife divorced him after twice finding him in bed with naked boys and informed diocesan officials.  Her claim was supported by other church members, who said they also informed the bishop of their concerns about the priest.

Prior to his conviction, Papworth told prosecutors that he had abused children throughout his 30 years as a priest, including in Southern California and Sonoma County. He is known to have served as rector of the Church of the Incarnation in Santa Rosa.

Bishop Susan Brown Snook has asked those with additional information to come forward.

“This is a painful chapter in the church’s history,” Brown Snook wrote. “But as Christians, we are called to hold our institutions to account and learn where they have failed. We also believe that we must be committed to healing for those who may have been harmed. … If allegations of child abuse were reported to any member of the clergy or any church employee today, we would immediately contact civil authorities.”