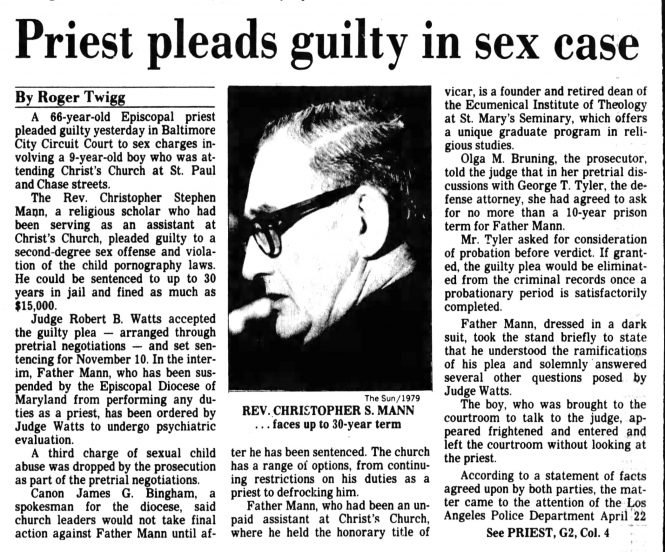 In June of 1983, the Rev. Dr. Christopher S. Mann (full name Robert Francis Christopher Stephen Mann) of Christ Episcopal Church in Baltimore was indicted on “charges of sexual child abuse, various sexual offenses, assault, perverted practice and violating Maryland’s child pornography laws.” A priest of the Church of England who was ordained in 1940, Mann was a postdoctoral fellow at Johns Hopkins University in Baltimore from 1965 to 1968. He was chairman of the Diocese of Maryland’s Ecumenical Task Force from 1979-1983, and Dean of the Ecumenical Institute at St. Mary’s Seminary from 1969 to 1983. Los Angeles police began an investigation of Mann in 1983 when he used a mail order film-processing service to develop photographs of at least one child in explicit sexual situations. Bishop David Leighton of the Episcopal Diocese of Maryland suspended Mann after his arrest. He pleaded guilty to sexually assaulting a nine-year old boy at Christ Church, Baltimore, and producing child pornography of the parishioner, whom he had baptized, over at least two years. He received five years of probation and was required to receive continued psychiatric treatment. According to Baltimore Sun reporting on the December 1, 1983 sentencing, “Mann will also be defrocked by the Episcopal diocese if he doesn’t resign.”