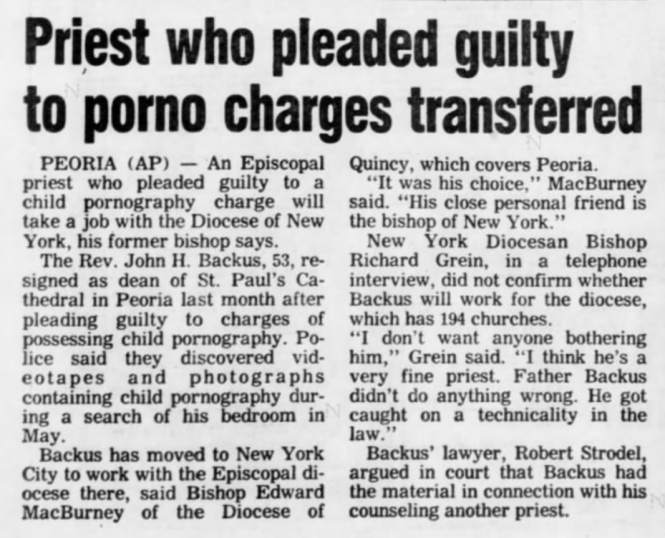 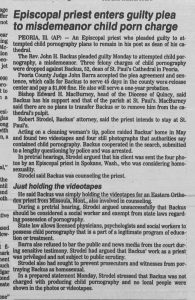 Church Divinity School of the Pacific graduate Episcopal Canon John Backus served as the Archbishop of Canterbury’s personal representative to the Orthodox Patriarch of Constantinople from 1974 to 1978 and was rector of the Church of the Good Shepherd, New York City, from 1992 to 2003. In 1991 Backus pleaded guilty to child pornography possession in Illinois after a maid discovered photographs and videotapes of 6-10 year old boys engaged in sex acts in his cathedral rectory closet in Peoria, the Episcopal Diocese of Quincy. The Associated Press ran six articles on his arrest, guilty plea, and sentencing. Backus claimed that unidentified priests who had confessed to him their struggles with child pornography asked him to hold the materials for them. One of the photographs had “FATHER JOHN MADE ME DO THIS” written on the reverse in a child’s handwriting. Backus refused to name the sources of the child pornography, citing the seal of the confessional. He left his cathedral parish in Peoria after paying a small fine, and moved to the Episcopal Diocese of New York with the strong support of Quincy Bishop Edward MacBurney and New York Bishop Richard Grein. Backus then held roles in the Diocese of New York and the Episcopal Church Ecumenical Office at 815 2nd Avenue until 2002. From the 1995 to 2002 Backus represented the Episcopal Church to the Russian Orthodox Patriarchs of Istanbul and Moscow. Episcopal News Service reported regularly that Backus represented The Episcopal Church USA to the Russian Orthodox Church with Presiding Bishop Frank Griswold, Armed Forces Bishop George Packard, Ecumenical Officer C. Christopher Epting, Bishop William Gregg, Bishop Richard Grein, Dr. John Robert Wright, Rev. David Perry, and Dr. Thomas Ferguson. The month after Backus’s final trip to Moscow in 2002, The New York Times featured three articles about the child pornography conviction and its repercussions in the Diocese of New York. Bishop Mark Sisk initially wrote in a letter to all Diocese of New York clergy that Backus “had done nothing that could be considered illegal or immoral.” Sisk withdrew his statement and requested a further investigation when Backus fired Good Shepherd vestry members who complained that they had not been notified of his criminal record for child pornography when he was hired. He retired following threatened canon disciplinary action. The Diocese of New York then notified three other unspecified dioceses about an unidentified Episcopal clergy member who had probably produced and distributed some of Canon Backus’s child pornography. According to an obituary, Backus was offered a position in Church History at Ming Hua Theological College of the Anglican Church of Hong Kong, but he died in Switzerland in 2009.