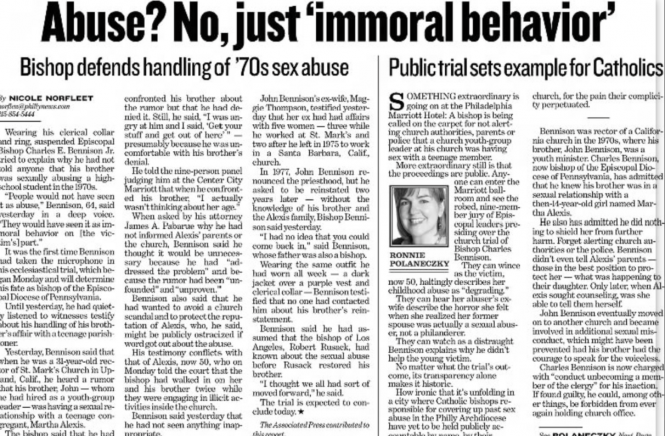 Claremont School of Theology graduate John Bennison was ordained to the priesthood by his father Charles E. Bennison, Sr., Episcopal Bishop of Michigan in 1975 and served parishes in two dioceses in California. A 1993 church investigation revealed that John Bennison engaged in a four-year relationship in the Episcopal Diocese of Los Angeles with a 14-year-old female parishioner whom he recruited for group sex with his first wife. In 2008 the 14-year-old victim testified that John Bennison’s brother Bishop Charles E. Bennison, Jr. walked in on him having sex with the teenager in a Sunday school classroom and in a church office on at least two occasions but did nothing. She testified that the abuse continued three to four times a week for four years. John Bennison also admitted to an affair with a 35-year-old St. Mark’s Episcopal Church, Upland, California parishioner and mother of three who came to him for marriage counseling. He also admitted to paying for an abortion for an 18-year-old parishioner with church funds while he was rector of All Saints by the Sea, Santa Barbara. He was also cited for having another affair with a 21-year-old member of the same parish whom he also forced to engage in group sex with his wife. John Bennison resigned voluntarily from the priesthood in 2006 without admitting any wrongdoing. California Diocese Bishop William Swing requested Bennison’s resignation only after picketing by members of the Survivors Network of Those Abused by Priests (SNAP) at his church.  Bishop Swing also praised Bennison for “his unblemished record of conduct here” in the San Francisco Diocese, but requested his resignation because of intense negative media pressure. Swing wrote, “Since 1993 I have had to wrestle with myself to ascertain whether or not Father Bennison was a threat to any of the people in our diocese.” John Bennison remained in the online Episcopal Clerical Directory until 2010. NBC reported in 2006 that he was substantially behind on child support payments following his second divorce, but had stayed current on payments for his Porsche. One of his daughters requested the California courts to grant her mother full legal custody because of his unmanaged anger. Neither Bennison ever faced criminal charges.

“was ordained to the priesthood by his father”

This right here as always concerned me about the TEC. It seems like all the positions require a family member to vouch for you to gain a position. This ultimately leads to an echo-chamber where people will overlook abuse and unethical behavior.

I know little of how other denominations appoint laystaff and clergy, but this seems like unique flaw for the Episcopalians.

Both the Bennison sons (Bennisons) were ordained by their dear old dad.

That is a big problem in the denomination, which is the tendency of bishops to create echo chambers.

Consider the long-simmering dispute between St. James the Great and the late bishop Bruno. There, it was inconceivable to the standing committee that Bruno had done anything wrong. Why? Because, like Putin, he had surrounded himself with apparatchiks and nomenklatura. Even now, I am not convinced that the baleful specter of Bruno has been banished, or that the standing committee really understands the toxic dynamics that ungirded that whole debacle. Indeed, I hear +Taylor say all the right words, but I see little sign of deeper understanding.