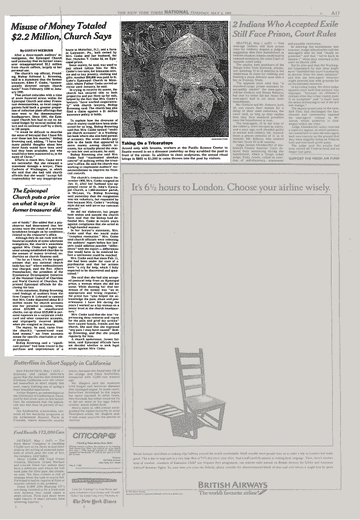 Ellen Cooke was convicted in 1996 of embezzling more than $1.5 million from the national offices of the Episcopal Church while serving as treasurer. In addition, she was found guilty of tax evasion.

A college dropout, Cooke was known for a tyrannical management style. Her misconduct was discovered when her husband Nicholas T. Cooke II, then an Episcopal priest, accepted the position of rector of St. John’s church in McLean VA.

Cooke alleged that she suffered from a psychiatric disorder that resulted in loss of memory. Judge Maryanne Trump Barry rejected these claims, stating that Cooke knew at all times that her conduct was illegal.

Following a plea deal, Cooke was sentenced to five years’ imprisonment. She and her husband, who resigned holy orders, were sued by the church for the embezzlement.

In the course of an investigation, Cooke was found to have used funds to support a lavish lifestyle, including a farm in Ottoman Virginia, a home in Montclair NJ, $320,000 in credit card charges between 1990 and 1995, including $96,000 in airplane flights, $39,000 in jewelry and $28,000 in restaurant bills. She also used the embezzled money to restore homes in New Jersey and Virginia and pay the private school tuition of her two sons.

As of 2022, Cooke resided in Richmond Virginia. She and her husband operate Black Swan Books in Richmond.