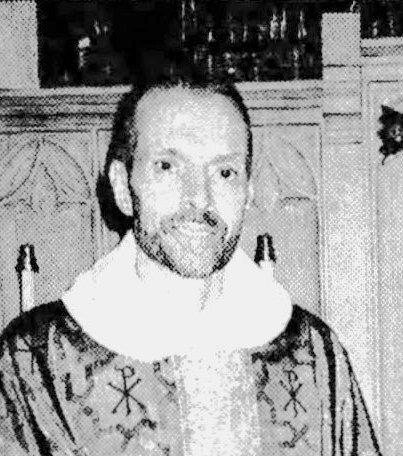 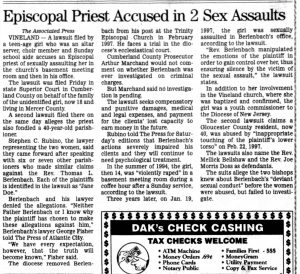 A lawsuit filed by a teen-age girl who was an altar server, choir member and Sunday school aide accuses an Episcopal priest of sexually assaulting her. The lawsuit was filed on behalf of the family of the unidentified girl, now 18 and living in another county. A second lawsuit filed there the same day alleges the priest also fondled a 40-year-old parishioner.
The lawyer representing the two unidentified women said they came forward after speaking with six or seven other parishioners who made similar claims against Fr. Thomas Berlenbach. Berlenbach and his lawyer denied the allegations. The diocese removed Berlenbach from his post at the Trinity Episcopal Church in Feb. 1997. He faces a trial in the diocese’s ecclesiastical court.
The county prosecutor would not comment on whether Berlenbach was ever investigated on criminal charges, but said no investigation is pending. The lawsuit seeks compensatory and punitive damages, medical and legal expenses, and payment for the clients’ lost capacity to earn money in the future.
In the summer of 1994, the girl, then 14, was “violently raped” in a basement meeting room during a coffee hour after a Sunday service, according to the lawsuit, and 3 years later, the girl was sexually assaulted in Berlenbach’s office.
The second lawsuit claims a woman, now 40, was abused by “inappropriate touching of the plaintiff’s lower torso” on Feb. 22, 1997. The lawsuits also name Bps. Mellick Bellshaw and Joe Morris Doss as defendants, alleging they knew about Berlenbach’s “deviant sexual conduct” before the women were abused, but failed to investigate

Why is the official archives copy blocked except for the committee the site mentions?

Good question. I thought Title IV proceedings were public records within the church.