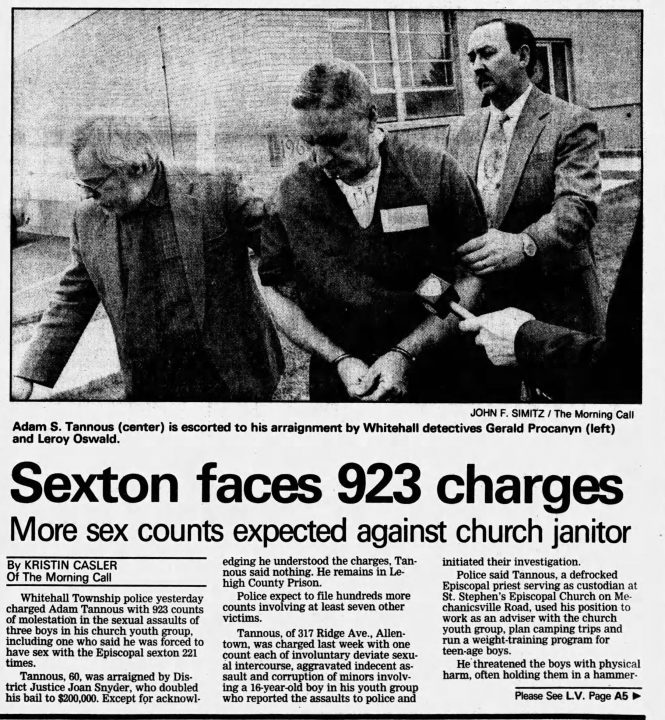 In April 1992 Adam S. Tannous was charged with 4,288 counts of child sexual assault, including 700 rape counts against one minor at St. Stephen’s Episcopal Church in Whitehall, Pennsylvania. Ordained to the priesthood by Bishop Frank W. Sterrett on June 15, 1957, Tannous was curate of Christ Episcopal Church in Reading, Pennsylvania before serving as rector of Calvary Episcopal Church, Wilkes-Barre from 1959 to 1966 and rector of St. George’s Episcopal Church in Hellertown, Pennsylvania from December 1966 to March 1970. He was removed from the priesthood in 1970 by Bishop Frederick Warnecke. He was arrested in August 1972 for sexual assault of a 15 year old boy and later hired as full-time sexton and youth group director at St. Stephen’s Episcopal Church by its rector the Rev. Joseph Falzone. Tannous pleaded guilty in 1992 to charges of assault and rape by seven boys; five others were unwilling to testify, and one was incapacitated by a suicide attempt. Many of the rapes occurred at the church itself Episcopal Diocese of Bethlehem Bishop Mark Dyer met with and apologized to the victims. Tannous died in Allentown General Hospital on October 23, 2000 after serving eight years of his sentence. Rector Joseph Falzone was never disciplined for hiring the defrocked Tannous, and Falzone retired from St. Stephen’s Church, Whitehall in 2000. He was rector emeritus until his death in 2020.

Serious question: how does a parish recover from something like this? They have a website so I assume they are still open. They also had another rector mentioned elsewhere on your site. What I don’t get about the Tannous Case is that so many of the rapes seem to have taken place AT the church itself and as part of the church-sponsored “body-building club” or whatever it was that he ran. Why would people continue attending a church where they knew that things like this happened, and where they knew that THEIR OWN PRIEST knew the perp had done them BEFORE HE WAS HIRED.

The Rev. Robin Hammeal-Urban’s excellent book “Wholeness After Betrayal: Restoring Trust in the Wake of Misconduct” is a great resource. Predictably enough, it is largely ignored by diocesan officials.

Robin’s approach centers on the importance of disclosure, of bringing light to dark, and of safe discourse. She also talks about how churches that fail to go through these processes often re-live and respond to the trauma for years, even decades, after incidents.

I’d strongly encourage that the book be mandatory reading in seminary, and among vestries. Too often, we either make excuses for misconduct, or we ignore it and hope it will go away.

My observation too is that Robin is kind, sincere, and shows an acute understanding of the many layers of harm caused by misconduct.

Thanks for the recommendation! I didn’t know about this one. Seems like there should be a surge in sales.

You’re welcome. I sent copies to ++Shannon Johnston and ++Goff here in DioVA, with predictable results. Hopefully it will be more useful to you.