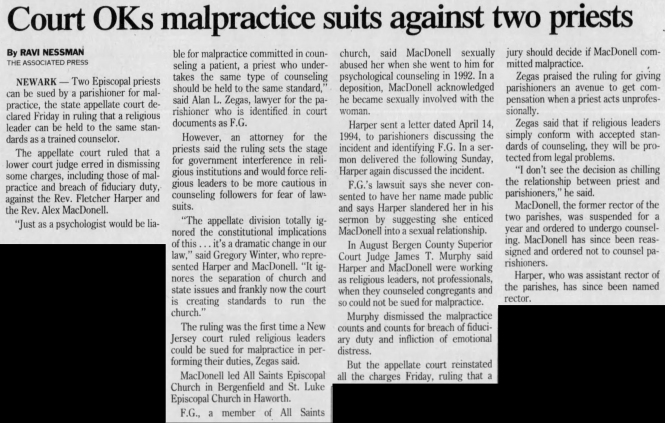 In 1996, the New Jersey State Appellate Court ruled that a parishioner could sue clergy for malpractice and breach of fiduciary duty.

The ruling was on a lawsuit by an adult woman against the Rev. Fletcher Harper and the Rev. Alex MacDonell. The parishioner was a member of All Saints Episcopal Church, Bergenfield, New Jersey, where she alleged that the married MacDonell sexually abused her when she went to him for counseling in 1992 and 1993. MacDonell admitted the sexual relationship in his depositions. MacDonell resigned as rector of All Saints and St. Luke’s Episcopal Church, Haworth, New Jersey. He was suspended for one year and required to receive counseling. He was then restored to the priesthood but forbidden to counsel female parishioners alone.
Fletcher Harper was sued for allegedly preaching a sermon about the plaintiff and sending a letter to parishioners claiming that she had enticed MacDonell. Both the sermon and the letter identified her and the sexual affair, but the plaintiff did not consent to be identified within the parishes.
The case continued through 1997 as a breach of trust claim litigated by the Episcopal Diocese of Newark as a co-defendant. On July 22, 1997, the Supreme Court of New Jersey ruled against the plaintiff on the grounds that, “To base a tort action on a breach of religious doctrine constitutes an establishment of religion in violation of the First Amendment.”
Alex MacDonell became chaplain to retired clergy in the Episcopal Diocese of Newark. 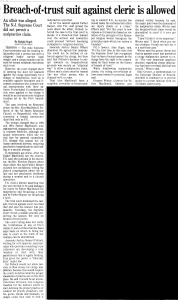 As of 2022, Fletcher Harper is a canonically resident priest in good standing of the Episcopal Diocese of Newark, and “the executive director of GreenFaith, a national interfaith environmental coalition headquartered in Highland Park, N.J. During his tenure at GreenFaith, Harper has launched the GreenFaith Fellowship Program, an interfaith environmental leadership initiative. A graduate of Princeton University and Union Theological Seminary, Harper served as a parish priest for 10 years and in leadership positions in the Episcopal Church before joining GreenFaith.” He was ordained in 1992.