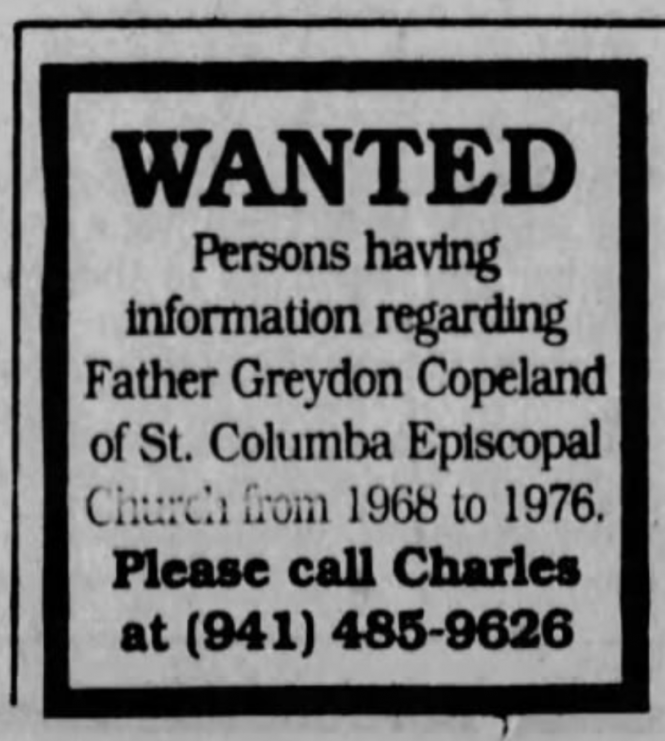 Episcopal priest Greydon Parker Copeland was an associate of the conservative Anglo-Catholic Order of St. Augustine ordained in 1948. He was a priest at two parishes in the   Episcopal Diocese of Long Islandbefore becoming rector of Emmanuel Episcopal Church, Washington DC from 1950 to 1968. He then moved to St. Columba’s Episcopal Church and St. Bernard of Clairvaux, North Miami Beach in the Episcopal Diocese of Southeast Florida. Copeland was confronted by church officials with complaints of child sexual assault from his time at the Episcopal Church of the Good Shepherd, Punta Gorda, Florida, on March 28, 1994. He admitted the offenses and committed suicide on the same day. Copeland was still listed in the Episcopal Clerical Directory for 1995. Throughout 1997 and 1998, Florida newspapers contained notices seeking information about Copeland’s activities for posthumous claims against the Diocese of Southeast Florida related to Copeland’s tenure at St. Columba’s, Marathon. Parents filed suits against Copeland’s former parishes, dioceses and bishops on 13 charges, including “negligent hiring and supervision, fraud and negligent infliction of emotional distress.” One family contended their son was “severely and permanently injured” by Copeland’s admitted molestations. “He continues to incur expenses for medical, psychiatric and psychological treatment, therapy and counseling.”