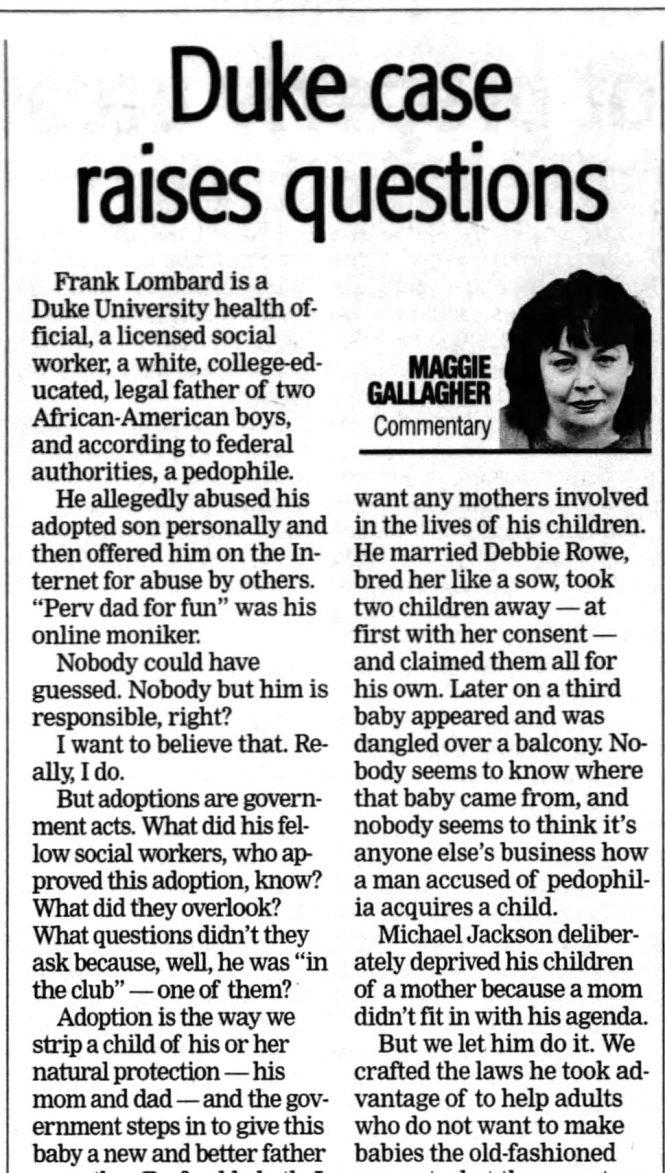 Prominent lay Episcopalian and Duke University official Frank Lombard was arrested on June 24, 2009 for offering his adopted five-year-old African American son to other individuals online for sexual purposes, creating and distributing pornography of his adopted son and of himself assaulting his adopted son, and for sexual exploitation of a minor. He also admitted molesting his second adopted son. Lombard pleaded guilty on December 17, 2009 and was sentenced on March 29, 2010 to 327 months in prison. He will be required to register as a sex offender during lifetime supervised release after his parole in 2038. Lombard was a Duke researcher specializing in social theories of victimhood and HIV/AIDS in the rural American South.

Because of Lombard’s profile in the Episcopal Diocese of North Carolina as an activist for issues around human sexuality and his vestry role at the Church of the Advocate in Carrboro, North Carolina, Bishop Michael Curry (later Presiding Bishop and Primate of The Episcopal Church) released the following statement:

“Frank Lombard is a parishioner of a congregation in the diocese of North Carolina. It is the bishop’s policy that in matters such as these, clergy will cooperate fully with law enforcement and allow the judicial process to run its course. In keeping with this same policy, clergy will not comment on investigations which are still in progress. The bishops and clergy of this diocese are committed to making certain that all of our churches remain safe places where all may worship and serve God. The Church is providing pastoral care and spiritual guidance for all parishioners who have been affected by this painful situation.”

The Episcopal Church of the Advocate removed all mentions of Lombard from its website, including those of his youth group mentoring offerings.
https://www.cnn.com/2009/CRIME/06/30/duke.molestation.internet/
https://archives.fbi.gov/archives/washingtondc/press-releases/2010/wfo032910.htm