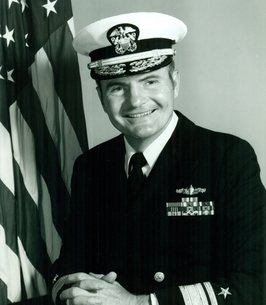 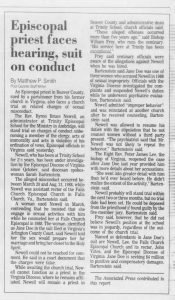 Episcopal priest Byron Bruce Newell was associate dean of the conservative evangelical Trinity Episcopal School for Ministry (TESM) in Ambridge, Pennsylvania, after a distinguished career in the United States Navy. He was ordained to the priesthood in 1988 after studies at Virginia Theological Seminary, and suspended almost immediately from his position as assistant rector at The Falls Church in Virginia following complaints by six women of sexual impropriety during counseling sessions. Newell was required by the Episcopal Diocese of Virginia to undergo psychological treatment and forbidden from counseling women without a third party present. He served next at Truro Church in Fairfax, Virginia, from 1989 to 1990 before moving to Trinity Seminary in 1990. In 1993, Newell was charged with “conduct unbecoming a member of the clergy, acts of immorality and acts in violation of his ordination vows” by the standing committee of the Diocese of Virginia. Newell initially pleaded innocence but then admitted guilt and was convicted of all charges. He was sued in the same year by a woman identified in court papers as Jane Doe, who alleged that Newell told her during premarital counseling that sex with him “would prepare her for marriage and bring her closer to the Holy Spirit.” Jane Doe sought $4 million in damages, naming Newell, the Falls Church, the Diocese of Virginia, and Falls Church rector John Yates as defendants. Newell was removed from the priesthood in 1993 but remained on staff at TESM until 1996, raising $8 million for the seminary which named a building in his honor. Newell subsequently served as a substitute math teacher at private schools in Sewickley, on the board of Anglican Global Mission Partners, and as a director of the Church’s Ministry Among Jewish People. Newell died in 2020.