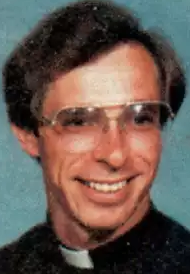 Episcopal organist Daniel Pater was director of music at St. Simon of Cyrene Episcopal Church in Lincoln Heights, Ohio in the Episcopal Diocese of Southern Ohio from 2013 to 2019. Pater had been removed from ordained ministry by the Roman Catholic Church in 2014, but The Episcopal Church did not conduct a review of his records prior to hiring him.

One woman reported to the Archdiocese of Cincinnati in October 1992 that Pater sexually abused her beginning when she was a 14-year-old parishioner in the early 1980s. The abuse continued until late 1990 or early 1991 during the priest’s trips back to Dayton from his work abroad. Pater acknowledged the abuse, which included intercourse. It occurred in the St. Charles, Dayton rectory, at Archbishop Alter High School(where the girl was a student), and in a parked car.
A second woman filed suit in 2004, claiming the Church failed to protect children from Pater. The second accuser claimed also that Pater sexually abused her in the early 1980s when she was a teenage parishioner.
International online news coverage of Pater’s sexual abuse of minors began in 2003.
“I’m very surprised,” St. Simon’s Episcopal Church rector the Rev. Mary Laymon (ELCA Lutheran) said when WCPO TV 9 News asked her about Pater’s past during a 2019 phone call. He was fired in 2019.
https://www.irishtimes.com/news/vatican-promoted-priest-aware-of-sex-abuse-record-1.373751
https://cruxnow.com/church-in-the-usa/2019/11/investigation-in-to-cincinnati-covington-dioceses-raises-concerns-over-tracking-abusers
http://www.bishopaccountability.org/Pater_Daniel_R.html